CLEVELAND, Ohio -- About 30 people rallied together during a windy and bitterly cold Saturday afternoon to spread the word of the importance of the Affordable Care Act. The group came together in front of the "Free Stamp" in Willard Park on Lakeside... 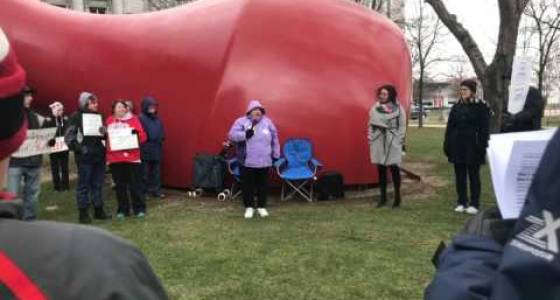 CLEVELAND, Ohio -- About 30 people rallied together during a windy and bitterly cold Saturday afternoon to spread the word of the importance of the Affordable Care Act.

The group came together in front of the "Free Stamp" in Willard Park on Lakeside Avenue in support of the Affordable Care Act.

Lucinda Garmus, a nurse, put the rally together because she said U.S. Senators Bernie Sanders and Chuck Schumer called for a "Day of Action."

No matter what political party someone is or what economic status they are in, everyone needs insurance, she said.

"Mine is fortunately treatable with prescription," he said. "But the insurance I had wouldn't pay for the prescription."

When he called his insurance company, he said it wouldn't switch him to another plan.

The company told him his condition is on what it called "the uninsurable conditions list," Kuhns said.

"The Affordable Care Act changed all that and I don't want to repeal this and go back to the way it was," he said.

The Affordable Care Act can't be repealed because many Americans are benefiting from it, she said to the crowd.

"If they take it away a lot of people could end up dying simply because they can't afford the health care and can't take care of themselves," Garmus said. "We absolutely don't want to see that happen."

Americans will be the best allies in order to improve the health care system, according to a letter from Congresswoman Marcy Kaptur read by Garmus.