When it was a brand new thing in 1984, KRCB found its plea for donations answered by a young boy in Kenwood.It was 35 cents — a quarter and a dime Scotch-taped to a piece of cardboard. With it came a note saying: “Finally, I can see Sesame Street.”Years... 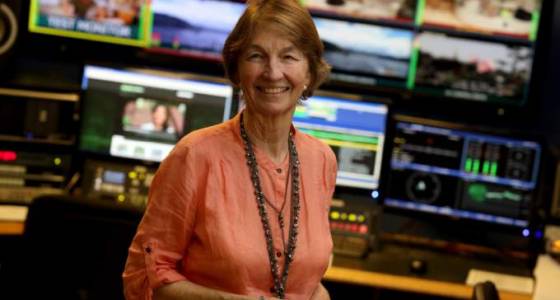 When it was a brand new thing in 1984, KRCB found its plea for donations answered by a young boy in Kenwood.

It was 35 cents — a quarter and a dime Scotch-taped to a piece of cardboard. With it came a note saying: “Finally, I can see Sesame Street.”

Years later, looking back, Nancy Dobbs, the station’s only CEO ever, has regretted that this first donation wasn’t framed on the studio wall.

“We should have saved it,” she said, “but we needed the money.”

Now, at the start of 2017, Rural California Broadcasting reaches some 825,000 viewers, working from a $2.8 annual million budget patched together from sponsorships, memberships, donations, bequests and about $500,000 in federal grants.

Next year, they’re going to need a bigger piggy bank.

The news came with a big headline earlier this month. KRCB has, in language other than government-speak, hit the jackpot.

It has been chosen for a share of the Federal Communications Commission’s $20 billion auction to clear the airwaves for the burgeoning telecommunications industry.

Now that the news is out, there’s a back story that bears telling. It is tightly wrapped around Dobbs, who didn’t set out to become a media tycoon. In fact she didn’t even like TV. In an interview years later, she confided to a reporter that, at the time, she certainly did not see TV as a positive force in our society, and wasn’t interested in promoting it.

Born in Los Angeles, she grew up on the East Coast and suggests she may have been “politicized” living in Miami during the Cuban missile crisis and being a student at UC Santa Barbara in the riotous ’60s. By the late 1970s, married to an SSU political science professor — with her own degree in political science — she was firmly entrenched in state politics as administrative assistant to Sen. Barry Keene and assumed that politics would be her career.

In 1979, a conversation about the possibility of public television for the area began on the Sonoma State campus.

Serendipitously, John Kramer, chair of the political science department, was just back from a sabbatical in Washington where he researched telecommunications benefits to rural areas. And he had discovered that a television bandwidth had been assigned to Cotati a decade or so earlier. And nothing more had ever been done.

An assembled board of directors applied to the FCC for seed money and also severed ties with the college when the then-president, the controversial Peter Diamandopoulos, stated firmly, “If I don’t control the board of directors, it cannot be on campus.”

Ultimately, the station also left its first Cotati address, receiving FCC permission to build on a site in Rohnert Park.

When Kramer approached Dobbs to be interim director of the embryonic public TV station, she was inclined to decline, but he was insistent, assuring her it would be — “only for about six months.”

There is a side story, too. Her marriage broke up in 1982 and, four years later, she and John Kramer were married. Together, they not only raised a family but raised the profile and the importance of public television, and later, of public radio, in the North Bay. John Kramer died in 2014. In so many ways, KRCB is an important part of his legacy.