NEW YORK—On Sunday morning, the time when many engage in the weekend ritual of reading the news over coffee, a large crowd converged outside the New York Times’ Manhattan headquarters on Eighth Ave. to defend the American press.“It’s... 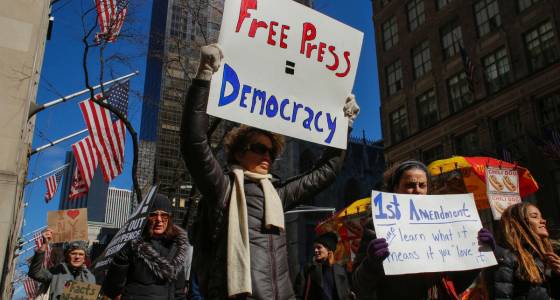 NEW YORK—On Sunday morning, the time when many engage in the weekend ritual of reading the news over coffee, a large crowd converged outside the New York Times’ Manhattan headquarters on Eighth Ave. to defend the American press.

“It’s a New York Sunday tradition,” read a sign held by Norman Cohen, a freelance TV producer, “Coffee, Bagels, and a FREE PRESS.” The protest, which was led by Get Organized BK, was in response to President Donald Trump’s decision on Friday to bar several news organizations from a White House briefing, including the Times.

Protesters walked from the Times to the offices of Fox News and the Wall Street Journal, and then to NBC’s headquarters at 30 Rockefeller Plaza before returning to the Times building. Protesters made it clear that they championed press freedom for all outlets, regardless of political leaning. Some had masking tape over their mouths, symbolizing a muzzling of the press.

“When the New York Times is under attack, what do we do?” Michael Zorek, a stay-at-home father from the Upper West Side of Manhattan shouted to the crowd. “Stand up! Fight back!” The group boomed back, responding with the mantra as Zorek shouted again, listing names of news organizations from BuzzFeed to the Public Broadcasting Service.

Dean Baquet, the executive editor of the New York Times, praised the protesters’ efforts. By blocking certain reporters from attending Friday’s open briefing, the president’s press secretary, Sean Spicer, “undermines one of the few institutions that has as its role asking tough, independent-minded questions of the president,” Baquet said.

The Trump administration did not respond to an email requesting comment.

On Eighth Ave., two men held a large U.S. flag, on which they had written “Press Freedom” in red, white and blue. On a piece of cardboard was a quotation from Arizona Republican Sen. John McCain: “When you look at history, the first thing dictators do is shut down the press.”

As the protest concluded, some people waved Sunday’s edition of the Times, folded to reveal a full-page advertisement from the newspaper.

It read: “Truth. It’s more important now than ever.”