CLEVELAND, Ohio - A dozen protesters attended Tuesday's Cleveland Community Police Commission (CPC) meeting to confront controversial police union president Steve Loomis and press him to step down from the commission. But Loomis, head of the Cleveland... 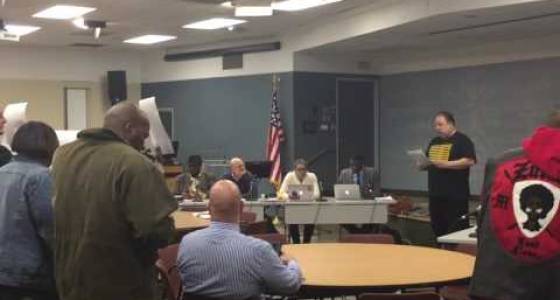 But Loomis, head of the Cleveland Police Patrolmen's Association, was a no-show.

The protesters walked into the meeting together when it started, carrying signs that said, "Lose Loomis, where's McGrath," referring to Public Safety Director Michael McGrath. Some held photos of Loomis' face in front of theirs.

The seven commissioners who were at the meeting listened silently to activist Garry Kanter as he gave a brief speech.

The 13-member commission works together to make policy recommendations to the police department. Its creation was mandated in the city's settlement with the U.S. Justice Department, known as a consent decree.

You can see Tuesday's protest in the video above.

Commission co-chair Mario Clopton-Zymler thanked Kanter and the other protesters for coming to the meeting and repeated that the commission has already asked Loomis to step down.

"Everyone who is sitting up here has signed a letter asking for Steve Loomis to resign, and we have also asked for his removal," Clopton-Zymler said. "So from our end as it relates to our powers and energies as an organization, that's where our authority stops. We hear your message."

The commissioners' letter asking for Loomis' resignation was sent in November 2016, and Loomis refused to step down from his position a couple weeks later.

Loomis' frequent absences from the full commission meetings was just one reason the commission asked him to step down. Loomis has not attended any of the 2017 commission meetings, and he missed 11 out of 18 meetings in 2016, according to attendance records provided to cleveland.com by a CPC member.

One of the main points on the Tuesday meeting's agenda was to talk through the proposed commission bylaw changes that would clarify how the commission could remove a member. There is not currently a system in place to remove a commissioner without a resignation.

While a potential bylaw amendment - which included language about excessive absences and tardiness - was agreed upon by the commissioners in attendance, the group needed two-thirds of the membership to approve the proposed addition, and there were not enough commissioners at the meeting to pass the changes.