FORT MYERS, Fla. – J.T. Chargois isn’t the ungrateful type. But this was one present he wanted no part of.When the Twins’ young righthander returned home for the winter in Sulphur, La., his family surprised him with a keepsake.“They... 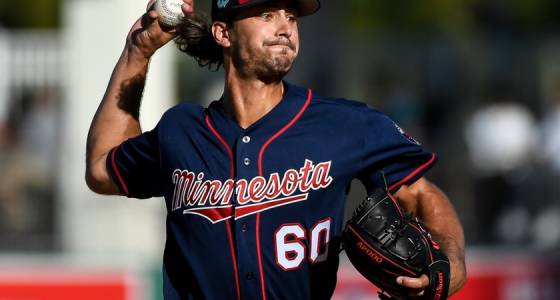 FORT MYERS, Fla. – J.T. Chargois isn’t the ungrateful type. But this was one present he wanted no part of.

When the Twins’ young righthander returned home for the winter in Sulphur, La., his family surprised him with a keepsake.

“They said, ‘Oh, we have all the videos here, tapes of your first game,’ ” Chargois winced. “I said, ‘You can throw them all in the trash. I do not want to see them.’ ”

Chargois had plenty of good moments during his rookie season. He gave up only one run in his last 13 appearances, after all. But that June 11 debut against the Red Sox, the culmination of everything he had worked for since he was 6?

“That was not OK with me. That was not acceptable,” Chargois said. “I’ll never watch it again.” Tom Wallace Gallery: Twins 5, Washington 2

Better to stick with the Cliffs Notes version of that ninth-inning meltdown, then: Chargois retired the first batter he ever faced in the major leagues, Dustin Pedroia, on a line drive to Max Kepler at first base. And then? Let’s just sum up the walks, the hits, the hit batter and wild pitch as “ugliness.” Five runs of ugliness.

“It was a rough day for him. But we all struggle at some point. It’s normal,” said Eddie Guardado, the Twins bullpen coach. “I’m sure Shaggy put it behind him, because when he came back, he was better. And he’s still getting better.”

So good, in fact, that he’s a strong candidate, albeit among more than a dozen, to capture a spot as a righthanded reliever in the Twins bullpen this spring. And there is good reason — like, say, his 36 career saves in the minors — to picture him and his 99-mph fastball someday tasked with closing out Minnesota victories.

“He has the stuff to be a future closer, down the road,” said Stew Cliburn, Chargois’ pitching coach last year at Class AAA Rochester. “Mentality-wise, I can see it in him. You’ve got to come to the ballpark every day knowing that you’re going to get the job done, with no doubts, and he’s developing that mind-set, that confidence. But these things take time.”

Chargois lost some time, though, during his second season with the Twins, after being drafted in the second round in 2012. His elbow was sore during the spring of 2013, and doctors advised a rehab program in hopes of sparing him surgery. It didn’t work, though, and Chargois had surgery that December, costing him the 2014 season, as well.

Now he’s 26 and fighting to establish himself. And sometimes that involves a fight within himself.

“I’m pretty high energy. If you’re ever at my house, I’m not sitting on my couch. I just have to move around. I’m always cleaning — I’m a super neat freak because I can’t sit still,” Chargois said. “My mind is the same way. I get super occupied when I pitch, trying to make everything perfect, every little detail.”

He has had a breakthrough with that, and Guardado was the reason. Chargois was throwing in the bullpen at U.S. Cellular Field in Chicago, and Guardado walked over and asked him what he was working on.

See, thinking about what you’re doing is important. But so is forgetting it when necessary, too.

“With Shaggy, there’s so much potential there — a 100-mph four-seamer, a hard slider — we don’t want to see him beat himself up and get in his own way,” Guardado said. “Like his first game. It didn’t work out too good. It can mess you up. But he’s learning to slow the mind down and just pitch. A guy like that, that’s all he needs to do.”