Hubert Mathews' decadeslong battle with drug addiction, including crack cocaine and heroin, ended in 2009. After years of help from social services, the Portland resident found treatment, housing and employment. Now, he will help others do the same. Mathews... 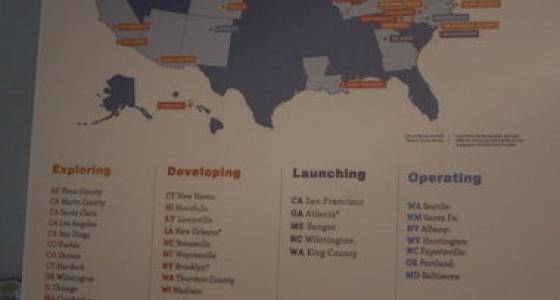 After years of help from social services, the Portland resident found treatment, housing and employment. Now, he will help others do the same.

Mathews has been training to be part of a Central City Concern team of case managers who will operate a new diversion program announced by the nonprofit, city and Multnomah County leaders Monday. The plan allows police downtown and in the Lloyd Center district to send low-level drug offenders to Mathews and the team instead of to jail.

The intent is to keep low-level offenders from repeated trips to jail, while also reducing the wide disparity of African Americans and other minorities from recommitting drug crimes, officials say.

The most unique factor of the program: If a participant relapses into drug use, it's not necessarily a trip to a county lockup. They're given a second chance as long as they show signs of progress toward recovery, Mathews said. Everyone has bad days, he said.

"Most people that use (drugs) have probably been using for years," Mathews said. "I used for 20 years. So you become accustomed to a certain lifestyle. And everyone is not going to be able to just stop. You have to be taught a new way to live."

Officials unveiled details of the one-year pilot program in a news conference featuring the county's top prosecutor and public defender along with Mayor Ted Wheeler, Multnomah County Chairwoman Deborah Kafoury and others. The county will provide an $800,000 budget administered by Central City Concern, a nonprofit that serves the homeless.

"Many will be homeless," Underhill said. "Some will have mental-health related issues or come from abusive homes or relationships."

The Law Enforcement Assisted Diversion program began in Seattle in 2011. In addition to Oregon and Washington, it will also operate in New Mexico, New York, West Virginia, Maryland and North Carolina in 2017. A handful of other cities and counties plan to launch programs later this year, and another 39 have explored or are developing programs.

How it works: Officers -- who have grounds for arresting someone in possession of a controlled substance with no more than five grams of heroin or 10 grams of cocaine or meth - would take the person to the case manager, according to a county policy document. Officers also have the discretion to suggest the program to individuals they may know that have a high risk of regular drug possession arrests.

If the individual agrees to treatment, the case managers will determine immediate needs, such as shelter, before an in-depth evaluation is conducted. The evaluation -- to be finished within 30 days at the most, but ideally within two -- looks at a client's behavioral health issues and other factors keeping them from employment and housing, such as prior legal involvement, gang history, or lack of education and training. If a client agrees to participate immediately but fails to show up to follow-up interviews, they can face jail time.

The person then develops a plan toward overcoming obstacles for housing and employment. No time limit is set for involvement in the program, according to the policy document.

"More jail beds isn't a blanket answer to the question: How we can make the community safer? All too often, it's the wrong answer," Kafoury said.

Kafoury said after the news conference that it's important to especially help minorities, including African Americans, to recover from drug addiction and keep them from recommitting possession crimes.

If the program after a year doesn't show a significant drop in such statistics, the county will reconsider it, she said. The budget received Board of Commissioners approval for this year, and it's too early to anticipate funding for next year, Kafoury said.

Underhill and Lane Borg, executive director of the Metropolitan Public Defender Services, said they're confident the program will work, based on the University of Washington studies.

The University of Washington study showed the LEAD program cost $10,787 per person annually after it had been operating for 29 months in King County. The study didn't calculate taxpayer costs for offenders not in the program, but it did conclude participants had fewer felony accusations than nonparticipants.

The study warns, however, that results could widely vary.

"Stay tuned," Borg said at the conference. "Look for our results, and stay engaged."

Wheeler said the program is also an opportunity for police officers to build community relationships. The city must find an alternative to the regular arrests of low-level drug offenders, bringing them to jail and ultimately releasing them back to the streets. That model needs to change, he said.

"It clearly is not working the way we'd like it to work," Wheeler said. "It's not helping that individual ... and it's not helping our community to be any safer. Law enforcement officers will be an important bridge between individuals and the services that are being provided."

The Oregonian/OregonLive reporter Noelle Crombie contributed to this report.