TALLAHASSEE — The 284 women housed in C-dorm at Gadsden Correctional Institution lived for months without hot water or heat, faced flooded bathrooms daily and endured water rations when the septic tanks were jammed with food waste.6 Months Ago5 Months Ago8... 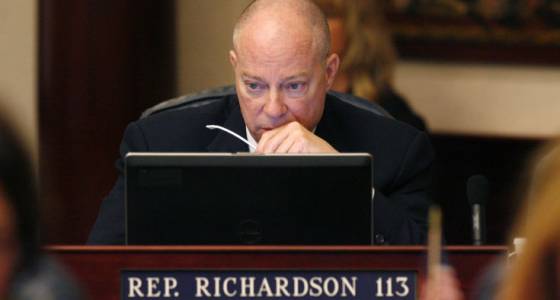 TALLAHASSEE — The 284 women housed in C-dorm at Gadsden Correctional Institution lived for months without hot water or heat, faced flooded bathrooms daily and endured water rations when the septic tanks were jammed with food waste.

After Rep. David Richardson demanded action following a series of surprise visits over the last 18 months, the private prison operator that runs the facility — Management Training Corp. of Centerville, Utah — received approval from the state to replace and repair the water heater, at a cost to taxpayers of nearly $10,000. But Warden Shelly Sonberg never authorized the work.

Richardson, a Miami Beach Democrat, announced another inspection this month, this time with the Department of Management Services Secretary Chad Poppell, the state agency that oversees private prisons, and two other state legislators.

In the two days before they arrived, four work crews descended on the prison and made many of the repairs. The vice president of the private prison operator, Management Training Corp. also arrived in town to meet with state officials. The state's chief inspector general, Melinda Miguel, dispatched inspectors to assess the safety and welfare of the inmates.

For Richardson, who has been on a one-man mission to force change in Florida's troubled prison system, it's another frustrating example of the failure of the state to monitor and hold accountable its prison operators.

"I'm a policymaker. I'm not a monitor. I'm not their auditor. Why is it that I'm out there fixing water heaters?" he said.

In a letter to Richardson Thursday, Poppell said he has since removed the state-paid official in charge of monitoring conditions at the prison and has also launched his own investigation.

He said the 22-year-old prison, like other private prisons built by the state, are "now beginning to show their age and present problems associated with older buildings." He said he has asked the Legislature to fund a full-time staff person to monitor "evolving infrastructure issues."

When Richardson returned Thursday with two investigators from the Florida Department of Corrections as requested by Miguel, other problems emerged at the prison, which houses 1,530 inmates in four dorms. They learned that there are 495 open work orders for repairs. Inmates said they had been pressured not to speak to inspectors and feared retaliation.

Richardson, a retired forensic auditor, has had success in calling attention to the problems he has uncovered at state-run prisons. He has revealed evidence of officer-on-inmate violence at youthful offender facilities, uncovered how gangs evaded officers, caught officers withholding food from inmates, and persuaded the Department of Corrections to close down the youthful offender wing at Lancaster Correctional Institution, a youthful offender prison. He uncovered "horrific" conditions at Columbia Correctional, where toilets wouldn't flush, showers didn't work, a heating system didn't heat and deafening sounds came from an exhaust fan.

He also dug deep into the finances at Lake City Correctional Institution, another one of the state's seven privately-operated prisons and discovered Corrections Corporations of America, now known as CoreCivic of Tennessee, had overcharged the state at least $16 million over the past seven years

Most of his reports have been welcomed by Corrections Secretary Julie Jones but resulted in silence from Republican lawmakers and Gov. Rick Scott, who last year recommended directing more money into improving the facilities at the state-run system for the first time, after years of shifting more state-run prison programs to private operators.

Richardson made his first unannounced trip to Gadsden Correctional on Oct. 7, 2015, he said. Then, he found no teachers in in many of the classrooms — and made a mental note to return.

On his next visit, on March 6, 2016, he spent nearly two hours with inmates in the recreation yard and heard then about the problems with the hot water. The warden followed up with him and told him the problem had been addressed.

He also heard several complaints about the prison refusing to run the heat in the winter. He saw how the shower stalls leaked into the bathroom, creating perpetual puddles. He saw toilets that weren't working, hot water faucets that were disabled. And he heard stories about how three to four times a month the inmates are prevented from using water except to flush the toilet, especially when the food service staff dumps excess food into the septic tank, causing the system to back up.

On Feb. 9, Richardson asked for a record of the hot water repairs and saw how Management Training asked and received permission from the Florida Department of Management Services to spend $9,970 on a new water heater.

The request for the repair was authorized on Dec. 19, but by Feb. 13 when Richardson visited again, it had not been fixed.

"They can't explain to me what took so long,'' he said. After he announced he would return with Poppell on Feb. 16, it was repaired but not fixed.

"Almost all of the sinks were working, the water was working. Inmates told us they had been painting the bathrooms to make it as pretty as they could,'' he said. "There was significant improvement."

Issa Arnita, communicators director for Management Training, told the Times/Herald that the company was "aware of hot water issues at the facility. While we've made short-term fixes, the entire system will ultimately need to be replaced."

He said the company made the state "aware of the need for a new system early last year but were told the replacement would not happen immediately … The $9,970 was only for the exchanger, one part of the hot water system" and the entire hot water system needs to be replaced.

He said the company will "continue to do maintenance on the hot water system until it is fully replaced … Our priority continues to be to ensure safe and humane conditions for the women under our care."

Further frustrating Richardson is the fact that the Florida Department of Management Services employs a full-time state monitor to oversee conditions at the Gadsden prison. He was copied on the letter authorizing the repairs, but Richardson asked him if he knew the hot water was out and knew of the need for repairs.

Richardson knows that female inmates inconvenienced by the lack of hot water may provoke questions from legislators. He has an answer.

"For me, this is personal,'' he told the Times/Herald. "When I was a teenager, the hot water went out on my home and my parents who were economically challenged couldn't afford to fix the hot water for six months. So I know what it's like to live without hot water. When I see this it touches me so personally and it makes me so angry."

He said he dealt with the shame and remembers having to boil water on the stove to get a hot bath. "But these ladies don't even have that option because they don't have a stove to boil water,'' he said.

Also accompanying Richardson and Poppell on the Feb. 16 visit were state Rep. Ross Spano, R-Dover, the chairman of the House Criminal Justice Subcommittee, and Sen. Gary Farmer, D-Lighthouse Point. They spoke to an inmate who had been without eyeglasses for three months and another woman who had leg pain and was not allowed to see the medical staff, Richardson said.

"It was eye opening,'' Spano said. "There were things that were good but there were also things that concerned me." He said he plans to work with Richardson to follow up on them.

He said he was especially concerned about the fact that if inmates filed a grievance "there was a pretty good chance it would be intercepted and it would not be reviewed."

Richardson has also explored the balance sheet at the prison, which is paid $43.67 a day per inmate. The price is below the maximum allowed by law for private prisons but was established by comparing Gadsden's costs to the state's maximum security prison for women, Lowell Correctional Institution — the highest cost female prison in the state — instead of a Hernando Correctional, where costs would be more comparable.

"Gadsden is a country club compared to Lowell,'' Richardson said. He also found that Gadsden has 11 people on staff that handle inmate classification who are not paid by Management Training but by the state. Those personnel costs are not deducted from the contract per diem, essentially creating a state subsidy for the company, he said.

Richardson believes that the Management Training contract may not only have inflated per diem figures but inflated costs for educational programming, which are $2.3 million a year.

"We're paying them a lot of money for education and programming and I can't get anywhere near $1 million when I walk around classrooms and observing, let alone $2.3 million,'' he said.

For example, Richardson said he walked into an electrical assistant class and inmates told him they were only allowed to do the textbook training because they didn't have the supplies to do the practical portion. The teacher told him he had asked for a list of supplies but hadn't received it. Six of the inmates were repeating the class because they hadn't been able to do the certification exam because of the lack of supplies.

"This is a waste of taxpayer dollars, and you're saying you can't buy some basic supplies,'' he said. "I've got a problem with that." He said he has asked for copies of the training budget.

"If they cut costs, they are increasing their profitability,'' Richardson said.

Arnita, spokesperson for Management Training, said Gadsden Correctional has 43 staff members who provide educational and vocational training, substance abuse counseling, life-skills courses and many other programs. The company considers educational training and programming "one of our greatest focuses," he said.

"Our commitment is to rehabilitation for these female offenders,'' Arnita said, acknowledging that "you can't provide training and rehab if there's no hot water."

Maggie Mickell, spokeswoman for the Department of Management Services, said the state will continue to investigate Richardson's findings.

"It is our belief that vendor performance in all areas, including our private prison vendors, must be above reproach and open for transparent review,'' she said in an email. "That's why we review all claims received and are committed to ensuring that the private prisons operating in Florida are performing according to contract and meeting statutory requirements."

Richardson said he briefed Management Training's vice president, Bernie Warner, on his findings last week and he is awaiting more answers from the agency and the company before he presents them with his final conclusions.