President Trump offers a few hints that could affect Ohio, with details to come later

WASHINGTON - Few Ohioans might argue with the notion of a strong defense. President Donald Trump's proposed increase in defense spending -- "one of the largest increases in national defense spending in American history," he said -- could be particularly... 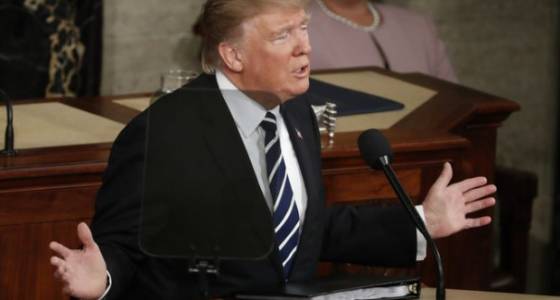 WASHINGTON - Few Ohioans might argue with the notion of a strong defense. President Donald Trump's proposed increase in defense spending -- "one of the largest increases in national defense spending in American history," he said -- could be particularly popular around Dayton and Greene County, where Wright Patterson Air Force Base keeps the economy humming -- and where Trump enjoyed nearly 60 percent voter support in the November election.

But corresponding cuts to other government departments and programs spell potential worries for Northeast Ohio. Trump will provide more information in coming weeks and present a full budget in May. Details were light in the president's very first address to a joint session of Congress Tuesday night -- by design, more of a broad outline of the president's vision than a task list.

His broad agenda, however, with a few tidbits from the speech, provides clues as to what to watch closely when it comes to these matters in Ohio.

Trump's EPA administrator, Scott Pruitt, made his reputation as an Oklahoma attorney general who enjoyed challenging the agency he now heads. He sued the EPA 14 times. Now he's going to help Trump draw up a budget for his agency, with cuts by as much as 25 percent, if pre-speech details prove to hold up.

Environmental groups are already worried, even though the president said in his speech that his administration "will promote clean air and clean water." The EPA helps fight algal blooms on Lake Erie. The agency is  instrumental in the multi-year Great Lakes Restoration Initiative, which helps pay for things such as keeping phosphorous from farms from entering Lake Erie and its tributaries, and restoring rivers and streams. The EPA provides grants and a revolving loan fund that Ohio communities tap to upgrade sewer and drinking water systems.

"Trump's priorities put billionaires and corporate polluters before the health of families and children," said Tiernan Sittenfeld, senior vice president of the League of Conservation Voters.

It is too soon to know specifics. But when deciding to vote to confirm Pruitt, U.S. Sen. Rob Portman, an Ohio Republican, said Pruitt assured him he will work to fully implement the Great Lakes Restoration Initiative, which Congress last authorized to spend $300 million a year.

But on Tuesday night, he laid out five principles he wants "as we move to create a better healthcare system for all Americans." They include coverage for pre-existing conditions, tax credits and health savings accounts to help people pay for insurance, expansion of insurance sales across state lines and flexibility for governors whose states use Medicaid, "to make sure no one is left out."

How this plays out is important in Ohio, and not just because healthcare is a major employer in Northeast Ohio, with Obamacare affecting revenues and protocols at local hospitals. Some 700,000 people in the state are covered under Obamacare's Medicaid-expansion provision, and about 230,000 more have individual coverage through Obamacare's private insurance plans. Governors including Ohio's John Kasich have made clear in the last week they don't want their residents to lose coverage.

Medical research plays a role in Northeast Ohio's economy, from medical schools and universities to private companies. Trump did not address any possible boost to research funding or the "Cancer Moonshot" launched under former Vice President Joe Biden.

But he talked about the need to speed advances - through cuts in regulation.

The "slow and burdensome approval process at the Food and Drug Administration keeps too many advances.... from reaching those in need," Trump said. He noted a guest in the House of Representatives visitors' gallery, Megan Crowley, 20, a survivor of Pompe Disease. Diagnosed when she was 15 months old, she was not expected to live past age 5. Her father, John Crowley, founded a biopharmaceutical company that helped save her life.

"If we slash the restraints, not just at the FDA but across our government, then we will be blessed with far more miracles like Megan," the president said.

Here's what you get when you reduce #FDA over-regulation. Not just more innovation, but lower drug prices. #CatoReacts #TrumpAddress pic.twitter.com/UVAIfifqW8

What will this mean for the scientists at Case Western Reserve University, University Hospitals and the Cleveland Clinic? It won't be known until Trump presents his budget.

If the Department of Housing and Urban Development gets a budget cut, as Trump is likely to request, look for community development block grants, or the CDBG program, to be a sub-target. The CDBG program pays for streetscapes, neighborhood stabilization and even loans to small businesses in districts marked for improvements.

Presidents always want to cut the program, saying it provides too much money to some communities and not enough to others. Local officials always fight back - and win. But if HUD gets cut overall, it could be hard to preserve the CDBG program at levels to which local governments are accustomed.

Also worth following over coming months: whether Trump wants to cut money for public housing. Philosophically, he is more in tune with extending tax credits and contracts to the private sector to carry out government work.

He also has indicated that perhaps HUD has become too generous; one of his first actions as president was to stop a pending premium cut for people who buy homes with FHA mortgages. The savings on the mortgage insurance premiums would have saved home buyers hundreds of dollars a year. Republicans said FHA might need that money if the homeowners default on their loans.

The good news for the Glenn Research Center in Cleveland is that is focuses heavily on aeronautics and propulsion, or making sure that spacecraft  can get where they are going. Trump advisers reportedly want to continue NASA's deep-space exploration mission while cutting its climate-change work.

Will that affect the center's work on low-carbon aircraft, which would cut the use of fossil fuel? And will Glenn be cut in Trump's overall cuts in order to boost defense? These bear watching.