By Bethany Barnes ATLANTA -- It is hard to imagine a more glowing picture of Portland Public Schools' pick for superintendent than the one district officials saw on their visit to this Deep South capital intended as the final check for flaws. On a 24-hour... 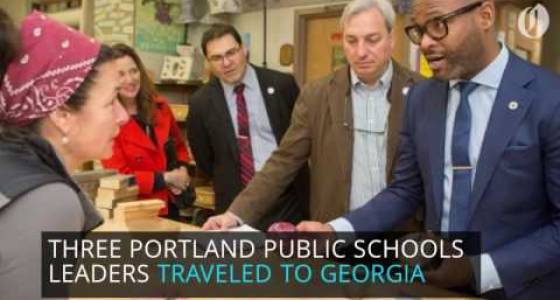 ATLANTA -- It is hard to imagine a more glowing picture of Portland Public Schools' pick for superintendent than the one district officials saw on their visit to this Deep South capital intended as the final check for flaws.

On a 24-hour vetting trip Thursday, two Portland school board members and the district's deputy chief executive officer aimed to distill how Donyall Dickey, lone finalist to lead Oregon's largest district, is seen by those he works with as chief academic and schools officer for Atlanta Public Schools.

Donyall Dickey, chief of schools and academics in Atlanta, impressed the team of Portland school leaders who traveled there to vet his performance. He is the top choice to become Portland's next superintendent. Phil Skinner / Special to The Oregonian/OregonLive

Yet those assessments are based on hearing from a small slice of a troubled district, served up by a man looking to land the biggest job he's ever had and a role he has aspired to since becoming a teacher 19 years ago. He has been on the job in Atlanta for just a year and a half.

While Dickey oversees all Atlanta schools, his chief assignment has been to turn around the lowest-performing tier: schools beset with a similar degree of poverty and abysmally low results as Portland's Rosa Parks Elementary, King K-8, George Middle School and Roosevelt High. In both cities, those struggling schools have been mired in the lowest-performing 15 percent statewide.

But Portland's vetting panel didn't ask to see or speak with educators or parents from any of those Atlanta schools, and Dickey didn't provide them the opportunity to do so.

Instead, he ferried them to Buckhead, the area Atlanta's rich and powerful call home. There, assistant principals, teachers, instructional specialists -- nearly everyone who crossed paths with a Portlander -- sang Dickey's praises.

The team from Portland was blown away by a tour of North Atlanta High, an International Baccalaureate magnet school. Views from the gleaming colossus are on par with those from a corporate high-rise, exactly what the IBM compound-turned-school used to be.

"The teachers and administrators were falling all over themselves to talk" about Dickey's contributions, Portland school board member Mike Rosen said. "That was impressive."

Everywhere Portland school leaders turned during a tour of North Atlanta High, educators stepped forward to testify about the amazing positive impact Atlanta chief of schools Donyall Dickey has made on them and their school. Portland leaders did not ask to hear from educators at low-performing schools. Phil Skinner / Special to The Oregonian/OregonLive

It's true. They were. Asked over and over if Dickey brought noticeable change during his short stint in Atlanta, they said yes. One assistant principal stressed she would follow Dickey to Portland in a few years.

It was the same story at Garden Hills Elementary, also in Buckhead. Consistently, people agreed Dickey brought cohesion and excellence to Atlanta. He empowered them, called them educational leaders, pulled people together.

As Dickey led the Portland contingent on tour, a teacher spotted him and broke away from a line of elementary children she was leading, folding him in a big embrace and expressing her sorrow at his departure.

"You're the best thing that ever happened to us!" she shouted.

The opinions of people from Atlanta schools that are less well-off, of which there are many, remain unknown to his Portland evaluators, however.

Portland school board members didn't ask to hear from any of the schools that Dickey arrived to find in the governor's crosshairs for rock-bottom performance. He was brought in from Philadelphia in summer 2015 to help Atlanta avoid a state takeover of failing schools, a threat that didn't materialize thanks to voters rebuking the idea last November.

Despite Dickey's boasting on his application for the Portland superintendent job about all he'd done to improve Atlanta's 15 lowest-performing schools, he didn't show them off.

Although Atlanta contains a concentration of Georgia's lowest-performing schools, Dickey connected them with teachers and principals in the schools that ranked No. 3, No. 6, No. 11 and No. 15 for best performance among Atlanta's 73 schools.

"That's Disneyland. It's not the way the rest of the school system works. It's just not," Abby Martin, an active Atlanta parent and ardent Dickey fan, told The Oregonian/OregonLive.

Dickey told The Oregonian/OregonLive he picked schools with demographics close to Portland's. In Oregon's largest district, 57 percent of students are white, just 10 percent are black and 38 percent are low-income.

He also said he tried to factor in Atlanta's famously gridlocked traffic when deciding what he could pack into a single day.

While North Atlanta and Garden Hills both ranked in the top 15 best-performing schools when he arrived in Atlanta, he said both retain large pockets of low achievement that need fixing. "Although some might regard (North Atlanta) as high-performing, kids are still struggling to meet proficiency on the end-of-course assessments," Dickey said.

He said the importance of Portland's upcoming school construction bond also influenced his choice of that particular campus, although the remaking of North Atlanta High occurred before he joined the district. "It's a school that has been modernized, so I think it was important to show the work that Atlanta has done. I am involved in modernization going forward, and I couldn't show them modernization that happened in real time, so I showed them modernization that had taken place."

Martin said Dickey's choices appear intended to show Portland something of its demographic mirror in Atlanta. But she called that misguided, considering his signature project is supposed to be turnaround schools.

"I blame the board," Martin said. "If I were a board member I would have asked, 'Can we seen one of these schools?' What did they come here for? They're validating their decision. That's how I view it."

Kohnstamm, the board vice chair, said she is satisfied the vetting team saw schools and talked to principals that reflect Portland Public Schools' conditions and challenges. She also said board members have talked, independently of Dickey, with a wide range of people in Atlanta and the previous districts where he worked.

Martin, who isn't afraid to criticize Atlanta Public School leaders, strongly admires Dickey's work. She got involved in district matters after being outraged by an ugly 2008 cheating scandal, which drew scathing national headlines and prison sentences for multiple educators. It still haunts the district.

She thinks Dickey will do well as a superintendent, though she admits his efforts are hard to judge because it hasn't been long enough to see whether they pay off. Martin said she will miss him, but doesn't begrudge his move.

Not everyone feels the same.

Atlanta parent activist Shawnna Hayes-Taveres watched hopefully as Dickey created systems and protocols to improve school functioning and student outcomes. But she is critical that he isn't sticking around to see if they work.

Without that evidence, "I think it's more hype than hope," she said.

She also feels he is betraying a district desperate for stable leadership. "He said he loved Atlanta and he would be here."

If Dickey meant what he said, why was he job-hunting, including responding to Portland's help-wanted ad, with only one full school year under his belt? Hayes-Taveres told The Oregonian/OregonLive those actions felt disingenuous from a man who'd told her to be patient and wait for his efforts to gel.

Dickey has pushed back against concerns he's on the make and will use Portland as a launching pad. Work he and his team did aligning curriculum and instruction, he said, was an effort that normally takes years.

"These systems and these practices that my team and I were able to develop, they are culturally embedded and will outlive my time in the district, and to me, that's commitment," Dickey said. "That's not just a flash in the pan."

That Dickey repeatedly assured Portlanders he was "built for turbulence" made Hayes-Taveres laugh. She said she's found him arrogant, emotional and controlling.

"I think his arrogance will make him work hard," Hayes-Taveres said. "I think Dr. Dickey will work to prove himself (in Portland) and that's a good thing. Every success, he'll definitely pat himself on the back. But if it's a success, it's OK."

The tour of Atlanta schools included a private dinner with the district's legal counsel and chief operating officer and a conference call with Atlanta Superintendent Meria Carstarphen that The Oregonian/OregonLive was barred from observing.

Kohnstamm said the conversation with Carstarphen gave her a better sense of just how turbulent Atlanta's situation had been, noting she didn't think it was too extreme to say they'd been looking down the barrel of a gun. Carstarphen said she never worried about having Dickey step in for her, the Portland team said.

Awwad said he felt reassured after speaking to the district's chief operating officer. He said he thinks his own skills and Dickey's would complement one another.

He's at home in the academic arena and accustomed to playing a hands-on role in it. In Atlanta, he personally leads many of the district's professional development sessions.

In Portland, he'd have a broader portfolio, including overseeing district finances, human resources and physical plant, all of which Awwad directly supervises; communications and public outreach; board relations; and bargaining contracts with the teachers union.

He would arrive to find a newly constituted school board, a heavy lift to fix tainted drinking water and other health and safety hazards, a tighter budget than in the past several years and a gaping achievement gap in a district that claims equity is its highest value.

Hiring a superintendent is always high stakes. But in Portland, the decision comes at a crucial moment of transition, following longtime Superintendent Carole Smith's resignation and the lead in drinking water scandal that revealed Portland to be a district that lacks basic systems and struggles to hold employees accountable.

Dickey has said he created systems where none existed in Atlanta, and that narrative was confirmed to the vetting team by Atlantans who appeared truly inspired by Dickey's impact.

At the beginning of the Portlanders' visit, Dickey noticed Awwad and Rosen both sported Portland Public Schools pins on their lapel jackets.

"If the trip goes well," Rosen replied, "I'll give you one at the end."

In the elevator, moments before the final goodbye, Rosen shook Dickey's hand. He'd slipped him the pin off his jacket.

Got a time about Portland Public Schools? Email Bethany: bbarnes@oregonian.com