Portland is set to declare a safety emergency on outer Southeast Division Street and unilaterally reduce speed limit after a spate of traffic deaths. The City Council will vote Thursday on the proposal to lower the speed limit from 35 to 30 mph on a 4.5-mile... 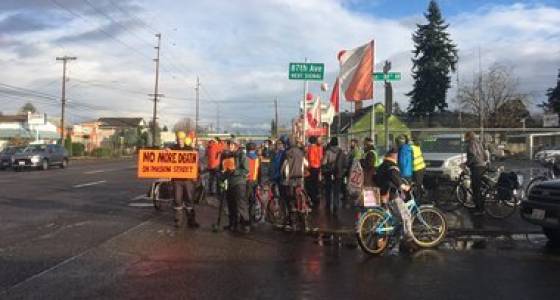 Portland is set to declare a safety emergency on outer Southeast Division Street and unilaterally reduce speed limit after a spate of traffic deaths.

The City Council will vote Thursday on the proposal to lower the speed limit from 35 to 30 mph on a 4.5-mile stretch from 82nd Avenue to the city border.

The Oregon Department of Transportation typically has jurisdiction over speed limits. But Portland plans to use a state law that allows for a 120-day emergency speed limit.

"We're doing this because Division really is a death corridor," said Commissioner Dan Saltzman, who oversees the city's Transportation Bureau. "We feel that this is the quickest route to do it. We think there's a safety threat on Division now."

Five people died in traffic crashes on outer Division Street in 2016, a year that saw 44 traffic fatalities citywide, the most since 2003.

Portland and other cities have pursued lower traffic speeds as a way to reduce traffic fatalities, particularly involving pedestrians. A 2011 study of traffic fatalities by the AAA Foundation showed that a pedestrian's chances of surviving being hit by a car are greater at lower speeds, but those chances begin to diminish faster when the car is traveling in excess of 32 mph.

City transportation officials have long chafed under the state's legal authority over speed limits, which extends even to the most minor side streets. It's lobbying for more control over speed limits as part of its Vision Zero plan to end traffic fatalities in the city by 2025.

Typically, a city would ask the state to conduct a traffic study and consider a speed zone change. If city and state transportation officials disagree on the finding, the city can appeal to the state's Speed Zone Review Panel.

The city is within its rights to temporarily impose a lower speed limit under the emergency ordinance, said Oregon Department of Transportation spokesman Don Hamilton.

"If they want to make it permanent, they'd have to request a speed zone investigation," Hamilton said.

Portland hasn't asked for such a study for the stretch of Division Street, from 82nd Avenue to the city limits at Southeast 174th. But Saltzman said the city intends to make a formal request to lower the speed limit permanently.

The state usually sets speed limits according to 85th percentile speed -- that which 85 percent of drivers travel naturally when traffic is moving freely. Outer Division is a broad thoroughfare with two travel lanes in each direction and a center turn lane.

It's not clear what will happen when the 120-day period is up.

Saltzman said the Portland intends pursue a permanent drop in the speed limit with the state agency. City attorneys also will examine whether the council could extend the emergency beyond the initial 120 days.

A proposal in the Legislature, House Bill 2682, would give cities and counties a process by which to unilaterally set speeds on state highways without state approval. The proposal was referred to the House Transportation Policy committee, but no hearing has been set.

Portland previously sought -- and received -- an exemption from the Legislature to lower speed limits on its bike-friendly neighborhood greenways.

And it's asked for expedited consideration of some speed-limit changes. Even so, the city Transportation Bureau has more than a dozen requests pending to lower speed limits, a spokesman said.

The reduced speed limit is one of several measures to try and make Division Street safer, particularly for pedestrians.

The city is preparing to activate speed cameras at Southeast Division and 156th Avenue. The cameras issue will warning tickets for the first month of operation, then begin issuing real citations.

It's also planning to install speed reader boards and pedestrian crossings with median islands throughout the corridor.