The Port of Portland and the company operating its container terminal have agreed to part ways at the end of March, nearly a year after the terminal was idled by labor strife. With the departure of Philippine-owned ICTSI Oregon, the Port would be... 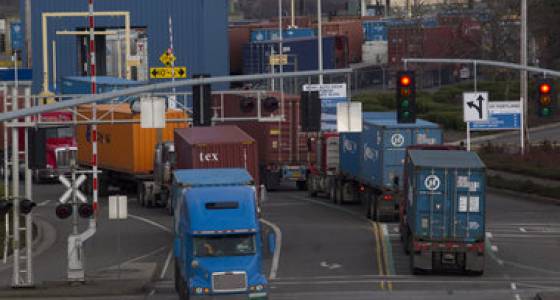 The Port of Portland and the company operating its container terminal have agreed to part ways at the end of March, nearly a year after the terminal was idled by labor strife.

With the departure of Philippine-owned ICTSI Oregon, the Port would be left once again in charge of Terminal 6, Oregon's only container terminal accessible by large ocean-crossing cargo vessels.

Under the agreement, ICTSI will pay the Port $11.45 million and return the equipment it purchased when it took over management of the terminal, Port Executive Director Bill Wyatt said.

"We were not very excited about the prospect of sitting around for the next five to 10 years with an empty terminal just collecting rent," Wyatt said. "It became clearer and clearer this was not going to get resolved anytime soon."

The agreement must be approved by the Port's commissioners, who meet March 8.

Even if the deal is approved, it's not likely the terminal will soon resume operations.

The Port hasn't seen regular cargo service in more than a year, and its largest customer, South Korea's Hanjin Shipping, filed for bankruptcy in August. Other carriers are struggling with a glut of cargo vessels and a drop in global trade.

Wyatt said the Port won't return to its old business model of hiring an stevedore company to run the terminal on the Port's behalf. Instead, it will look for another arrangement that minimizes the Port's financial exposure.

The Port operated the terminal itself for more than 30 years, turning a profit during only two of them. It subsidized the operation as part of the public agency's mission to support the state's economy.

But by 2007, Port leaders saw a private operator as the only sustainable option.

The Port leased the terminal to ICTSI in 2010 under a 25-year contract. The company agreed to pay the Port $4.5 million annually after an initial rent payment of $8 million. ICTSI took over terminal operations in 2011.

Things went about as planned for about a year, until the International Longshore and Warehouse Union claimed jurisdiction over jobs plugging and unplugging refrigerated containers that had traditionally belonged to union electricians who worked for the Port.

The dispute led to years of court battles and work slowdowns at the terminal. Carriers threatened to pull their business. By 2013, the Port agreed to pay Hanjin millions of dollars in incentives to keep calling on Terminal 6. But by early 2015, the company notified its customers that it would drop service to Portland.

Portland's container terminal, 102 miles upriver from the ocean, never seriously competed with major West Coast container ports. In 2008, Portland accounted for just 1.3 percent of container movement along the coast, according to the Pacific Maritime Association.

Nonetheless, its idling has cost Oregon exporters about $15 million a year in the cost of trucking goods to other ports, according to a 2016 study. It's been especially costly for producers of products with small profit margins, such as compressed hay shipped to feed dairy or livestock animals overseas.

The Port's other lines of marine cargo business have been unaffected by the turmoil. It led the West Coast in the export of cars last year, though the 50,000 exported vehicles were dwarfed by the 241,000 imported through Portland.