CHESTER -- Environmentalists are looking to run out the clock on Gov. Chris Christie. With Christie leaving office in January, some environmentalists are concerned a panel stocked with his allies will lessen building restrictions in an ecologically sensitive... 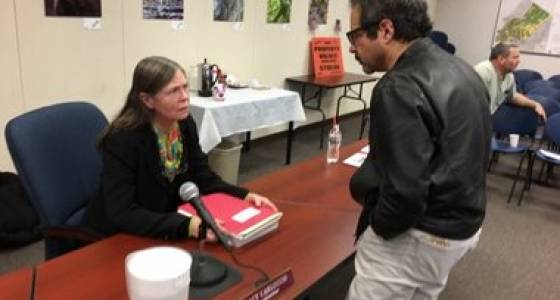 CHESTER -- Environmentalists are looking to run out the clock on Gov. Chris Christie.

With Christie leaving office in January, some environmentalists are concerned a panel stocked with his allies will lessen building restrictions in an ecologically sensitive swath of northern New Jersey.

They hope to slow any suggestion of change by pro-developments members of the Highlands Council until a new governor can be elected.

"We're going to try to delay it as much as we can," said Elliott Ruga, policy director for the New Jersey Highlands Coalition, an organization that supports the Highlands Act.

When asked about the timeframe for updating the regional master plan, Rilee told NJ Advance Media following the council's Feb. 16 meeting he is "hopeful that it can get done this year."

The stakes for the outcome is significant. The regional master plan interprets the 2004 Highlands Act, which placed additional limits on development in an effort to protect the drinking water source for 5 million New Jersey residents. It also sets out goals and policies that guide state Department of Environmental Protection regulations for the entire region.

Under the law, the master plan must be reviewed every six years by the Highlands Council. That review has been underway since 2014 and is now entering the home stretch.

As with the proposed natural gas pipeline project in the Pinelands, which was approved on Friday, the regional master plan review in the 860,000-acre Highlands Region is a battle point between those seeking to strengthen environmental protections and others -- in keeping with Christie's philosophy -- wanting to promote development and business interests.

"They've got the votes to do it," Tittel said.

Since all 14 members of the Highlands Council are holdovers on expired terms, including eight chosen by Christie, Tittel argued that it would be reasonable to defer any regional master plan amendments until the next governor, quite possibly a Democrat, is in office.

Rilee, a Republican who was named the council's chairman by Christie in 2011, said no amendments had yet been discussed.

"Any amendments that may or may not take place would be good ones," Rilee said.

Like Tittel, Ruga said he is cautious that amendments would benefit the environment. He speculated that a tactical influx in public comments requiring review might push any vote to amend well into next year, when the council's makeup may be dramatically different.

"As we get closer to the departure of Christie, they're going to try to weaken the (regional master plan) as much as they can," Ruga said, referring to pro-development forces.

Christie's spokesman, Brian Murray, did not respond to a request for comment.

The power shift led to the ouster, in 2012, of then-Executive Director Eileen Swan, who had served as an environmental adviser to former Gov Jon S. Corzine.

Amanda Brown/For the Star-LedgerBill Cogger gives a farewell speech at his last Highlands Council meeting in 2011.

Four members of the Highlands Council, including former Sussex County Freeholder Richard Vohden, are on the committee reviewing the master plan for possible changes.

Asked for an example of amendments under consideration, Vohden said he is questioning the 2008 regional master plan's stipulation of a 1,000-foot buffer zone for building near vernal pools.

Vohden said the vernal pool buffer zone is not part of the Highlands Act and is both unconstitutional and wrongly curtailing development in places such as Green Township, where he lives.

Vohden, a Republican, was among Christie's picks for the council.

Highlands Council member Tracy Carluccio, one of two charter members and a frequent critic of the Christie faction, asked to join the committee reviewing the master plan and was rebuffed.

"I think it's very important that the council consider a very deliberative process that involves the public to the maximum extent in any amendments," Carluccio said.

Highlands Council member Carl Richko said speculation on the next governor should not influence the timeframe for possibly amending the regional master plan.

"I just want it to be done the correct way, whether it be in the next couple of months or in the next year," said Richko, an unaffiliated voter and former West Milford mayor chosen by former Gov. Jon Corzine.