A man died and two Casselberry policemen were injured in an early morning shootout after he called police and fired a shotgun at the arriving officers, officials say.James Lee Parran called 911, claimed he had battered his wife, was armed and... 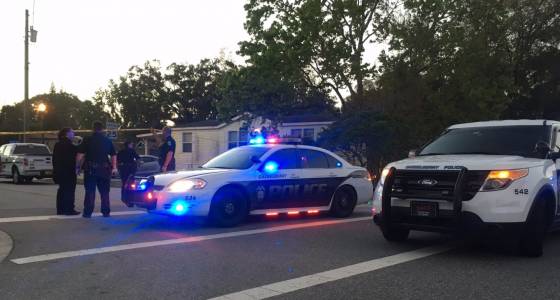 A man died and two Casselberry policemen were injured in an early morning shootout after he called police and fired a shotgun at the arriving officers, officials say.

James Lee Parran called 911, claimed he had battered his wife, was armed and would hurt other people. When officers went to his home on Crestview Drive to confront him, Parran is accused leveling a shotgun at them and firing multiple shots, Casselberry Police Chief Larry Krantz said.

Four of the five responding officers returned fire, and Parran was later found dead in the doorway of the home, Krantz said he does not yet know whether Parran’s gunshot was self-inflicted or if he died by officers’ bullets.

Parran’s shotgun pellets struck two officers — Ryan McIntosh and Cpl. Adam Phillips. Krantz called their wounds “superficial” and both were treated at a hospital and released within hours.

“My officers acted admirably when faced with this situation,” Casselberry Police chief Larry Krantz said at a news conference this morning. “Make no mistake about it, this was a deadly force encounter.”

The other two officers who shot at Parran, but were not injured, are Robert Blackwell and Cpl. Robert Judges.

The suspect’s wife left the home before the shooting began, Krantz said. Police later interviewed her, and by midday, she was with her family. Her name was not released.

Krantz said the exchange of gunfire did not last very long, but he did not provide a timeline of the incident.

Police evacuated fewer than a dozen people from nearby homes during the incident as SWAT along with officers from agencies across Central Florida surrounded the house.

“They were able to contain [Parran and] keep him within the confines of his residence,” Krantz said. “They also were able to retreat and take measures to evacuate the injured officers who were on scene.”

Neighbor Billy Raye Carson Jr. was sleeping when he heard what he thought were fireworks. When he opened his front door he was met with bursts of gunfire from two doors down.

"They were just blindly shooting at the house and started shouting for me to get back inside," said Carson, 30.

Carson said as he was watching the chaos unfold from his doorway, he saw both cops get injured.

That’s when law enforcement retreated and threw a flash-bang into the home, he said.

Carson said he saw one officer with blood on his face and another carried away from fellow law enforcement. He estimated at least 50 or 60 gunshots were fired throughout the ordeal.

"All I could think was to get me and my roommates down and away from the windows," Carson said, adding that his trailer was shot twice.

He said he was friends with Parran.

Krantz said Parran had no history of violence and police had never been called to the home, aside from a noise complaint.

Carson said the suspect was a military veteran who was always relaxing on his front porch. Krantz said he believed Parran had been in the Marines.

"You could always hear him playing his country music," he said. "He was a nice guy. Something must have just made him crack."

He said they talk frequently and there were no signs the suspect or his wife were having any problems.

Two Casselberry police officers were injured in a shootout early Saturday after responding to a domestic violence call.

Two Casselberry police officers were injured in a shootout early Saturday after responding to a domestic violence call.

Margaret Daly, 28, said she was coming home from her shift at Wendy’s when she saw officers zipping past her.

Her mother called and told her to be careful, because gunfire kept going off.

As she drove near the neighborhood, she saw at least 100 cars and could hear shooting.

Daly said officers from a slew of agencies were there, including Sanford, Winter Springs, Casselberry and Seminole County.

She said all of the officers had long guns.

“It was like one batch of gunfire, then a little bit later there was more,” Daly said. “...There’s just so many cops here. I’ve never seen anything like this."

The Florida Department of Law Enforcement is investigating, Krantz said.

What appeared to be several family members and friends were talking to Casselberry and FDLE investigators in the back parking lot of nearby convenience story.

One of the men was on cell phone and crying saying: “They shot him. The cops just shot him.” They did not want to talk.

This shooting comes after Orlando Police Lt. Debra Clayton was shot and killed last month at a Wal-Mart. After a days-long manhunt, Markeith Loyd was arrested and charged in her death.

Governor Rick Scott thanked the wounded officers for their bravery in a statement Saturday morning.

"Every day our brave law enforcement officers place their lives on the line to protect Florida's communities,” Scott said. “Ann and I are praying for a speedy recovery for the two Casselberry Police Department officers injured this morning and thank them for their courage in the face of danger."

This is a developing story. Check back for details.