Police say truck driver 'drifted over, hit guard rail and flipped' on I-35

CaptionCloseA delivery truck driver said he doesn't know how he veered off Interstate 35, hit a guard rail and flipped his truck Monday afternoon in the city's Southwest Side, police said.Officers responded to the rollover around 1:30 p.m. in the 10600... 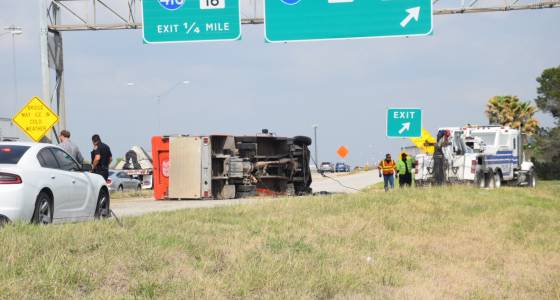 A delivery truck driver said he doesn't know how he veered off Interstate 35, hit a guard rail and flipped his truck Monday afternoon in the city's Southwest Side, police said.

Officers responded to the rollover around 1:30 p.m. in the 10600 block of northbound Interstate 35 South, where they found a G&K Services truck flipped over.

"He was driving in the right lane, drifted over, hit the guard rail and flipped one time," said a traffic officer at the scene.

Firefighters on Wednesday, Feb. 22, 2017, respond to an apartment fire that began as a vehicle fire in the 4500 block of Pecan Valley Drive. (Caleb Downs, J.M. Scott)

But police on the scene said the unidentified driver told police and representatives of G&K Services that "he doesn't know what happened" before the crash.

There is no evidence the driver was intoxicated, police said. The driver's vehicle was the only one involved, and the driver escaped the accident without serious injury.

ALSO READ:  Teen shot in the legs 'for no apparent reason' on the East Side

"His wife was maybe going to take him [to the hospital] just in case, but he was walking and talking," the officer said.

A representative for G&K Services, a uniform rental company, declined to comment on the accident.