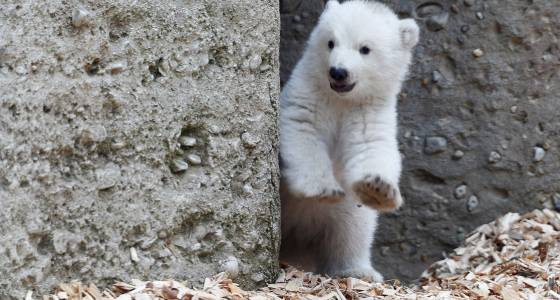 A German polar bear cub pulled out all the stops as she took her first steps Sunday at a Munich zoo.

Shutterbugs captured the 14-week-old, 18-pound furball simultaneously winking and throwing up a ‘dab’-inspired move as she stepped out at the Hellabrunn Zoo, The Telegraph reports.

The dab is a move in which the dancer–or bear cub– raises one’s arms while dropping the head into one’s elbow.

The unnamed cub was slightly “wobbly on her feet, but full of enthusiasm,” a zoo employee told the UK paper, adding the young bear likes to explore the pen while her mother, Giovanna, rests.

“We are delighted to see the day-to-day progress of the female cub,” said the zoo’s director Rasem Baban.

“For Giovanna, the real work as a polar bear mum now begins as she will have to keep an eye on the little one. But even this she will manage with no problem,” Baban said.