Plane that crashed into Riverside neighborhood had engine that wouldn’t start, witness says

The pilot of the airplane that crashed into a Riverside neighborhood, killing three people, injuring two others and destroying two houses, was twice unable to start the engine, then hurriedly took off Monday afternoon when the rain ceased, said the co-owner... 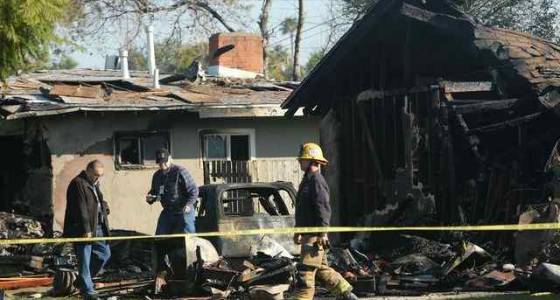 The pilot of the airplane that crashed into a Riverside neighborhood, killing three people, injuring two others and destroying two houses, was twice unable to start the engine, then hurriedly took off Monday afternoon when the rain ceased, said the co-owner of the café at Riverside Municipal Airport.

Terry Williams, a spokesman for the lead agency in the crash investigation, the National Transportation Safety Board, said he had no information on engine problems or other troubles. The NTSB is planning to hold a news conference at 3 p.m.

The three killed in the crash a mile east of the airport were an adult man and woman and a teenage girl, a Riverside police spokesman said. Their names have not been released.

The two survivors, both adult women, remained hospitalized in critical condition Tuesday, fire officials said at a morning news conference. One suffered third-degree burns over 90 percent of her body. The other is listed as critical because of possible damage to her airway.

The details released Tuesday clarify preliminary information given Monday by Riverside’s fire chief that the plane was carrying a husband and wife and three teenagers.

All of the people in the plane were believed to be related, and to have family in San Jose, fire officials said.

They had come to Southern California for a cheerleading competition at Disney California Adventure Park and had just taken off to return to San Jose when they crashed.

‘I HAD SOME SORT OF FEELING’

D&D Airport Café co-owner Delmy Pennington said she didn’t know what attracted her attention to the green Cessna 310. But she noticed that when the pilot was unable to start the plane initially, the plane taxied to the terminal and all five people got off.

The second time the engine failed to start, the family came into the café to eat.

But when the weather improved - it had been raining on and off all day Monday - one of the adult women rushed the family out the door.

“The woman said, ‘Sorry, we’ve got to go,’” Pennington said.

Pennington had just delivered the silverware when the family left.

“I had some sort of feeling, I don’t know,” Pennington said. “My heart was telling me something.”

She watched as the plane slowly taxied for takeoff. As it did, the plane rocked back and forth, front to back. Pennington said she doesn’t know much about airplanes, but “I’ve been here 25 years and I’ve never seen an airplane go like this,” she said, motioning with her hand.

Pennington said she later learned of the crash from her daughter Theresa Pearce and connected that with what she saw at the airport.

“I feel like my heart was broke,” Pennington said.

Witnesses said they saw the plane turn and begin coming down steeply about 4:40 p.m. It crashed into a house in the 6400 block Rhonda Road with such force that neighbors thought there had been a train derailment or earthquake, then burst into flames that could be seen blocks away.

Some 60 firefighters responded to the scene. Two of them heard moaning coming from a bedroom and dug out one of the victims who had been on the plane - the survivor who was badly burned.

The crash sent wreckage at least a half-mile away, Riverside Fire Chief Michael Moore said Monday. Enough fuel from the plane’s tank spilled that the fire burned into the night.

At the scene of the crash, a faint smell of smoke hung in the air Tuesday morning as firefighters continued combing through the wreckage. The bodies of the man and girl were removed late Tuesday morning; the woman’s body had been removed sometime before then.

Riverside Fire Department investigators could be seen on top of the roof of one of the burned houses, inspecting a propeller situated near the house’s chimney.

The house directly south of that was half reduced to rubble. The burned-out shell of a PT Cruiser was in the driveway.

About 20 homes in the neighborhood were evacuated Monday night so the NTSB could conduct its investigation. A handful of families stayed overnight at a Red Cross shelter set up at a nearby community center.

By Tuesday morning, nearly all of the evacuated residents had returned home.

Staff writer Ali Tadayon and The Associated Press contributed to this report.

This story is developing. Check back for updates.