Pitino on not being in the top 25 this week: "I don't care about the rankings"

When the top 25 polls were released Monday and the Gophers men's basketball team found itself on the outside despite a seven-game winning streak, many fans were furious.Minnesota coach Richard Pitino didn't agree with his team being snubbed my some... 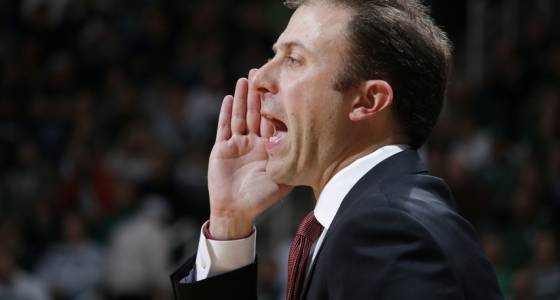 When the top 25 polls were released Monday and the Gophers men's basketball team found itself on the outside despite a seven-game winning streak, many fans were furious.

Minnesota coach Richard Pitino didn't agree with his team being snubbed my some voters, but it doesn't really bother him.

"Fans get outraged over not being ranked," Pitino said on his radio show. "When you win seven in a row in the Big Ten, you should be ranked. The biggest thing with me is I don’t care about the rankings. I’ve said it from Day 1. They’re totally unimportant."

Everything points to Minnesota being seeded as high as No. 5 in the Big Dance right now. And it could be even higher if the Gophers keep winning.

So why does it matter if they’re not ranked? It’s not like being in the top 25 for the first time in four years helped the Gophers before when they got ranked at No. 24 on Jan. 9. Two days later, Pitino’s team got embarrassed 65-47 at Michigan State, which started the five-game losing streak.

“What I care about is RPI, strength of schedule,” Pitino said. “There are six things the (NCAA tournament selection committee) looks at and they’re not coaches’ poll and (Associated Press poll). So those things aren’t important.”

The Gophers received 66 points in the AP poll on Monday, basically putting them at the No. 26 slot just outside the rankings (I voted them No. 25 by the way). But the USA Today coaches poll really showed disrespect (likely taking a shot at the Big Ten) by only giving Minnesota 10 points. That was behind Creighton (44 points), South Carolina (25), Southern Cal (21), Middle Tennessee State (20), Oklahoma State (16) and Dayton (15). The latter two are on the bubble.

“People have got to realize that the coach’s poll, coaches only pay attention to their team and whoever they may play,” he said. “So you don’t know who’s voting. It could be a school out in California and they don’t really care. Half the time they have their (director of basketball operations) guy do it.”

PLAYING LOUISVILLE?: Richard Pitino is 0-1 against his father, Rick Pitino. And it doesn’t seem like he wants the Gophers to play Louisville again anytime soon. He was asked on his radio show about the possibility of the Pitino family rematch in the NCAA tournament this year. They will be the first father-and-son to coach teams in the tournament in the same year.

Pitino said his wife even asked him recently if they could play each other -- and he hoped not.

“You shouldn’t do that,” Pitino said. “They do like the storylines, but I hope they stay away from that. But at the end of the day, it’s great we’re talking about NCAA tournament seeds from where we were a year ago.”

ESPN’s Joe Lunardi has Minnesota and Louisville in the Midwest Region both opening the tournament in Indianapolis. But he projects the Gophers as a No. 7 seed playing No. 10 seed Virginia Tech with a possible second round matchup with No. 2 Kentucky. And Lunardi has the Cardinals seeded No. 2 with a potential second round matchup with the winner of No. 7 Iowa State and No. 10 Middle Tennessee.

Personally, I think if the selection committee decides to have the Pitinos in the same location to open the tournament that would be a missed opportunity for them not to have Minnesota and Louisville potentially meet in the second round. But you never know what will happen.

“That would be the lamest thing ever if they do that,” Pitino said. “I don’t think they’ll do it.”