CANNON BALL, N.D. — Authorities this week cleared the last holdouts from a large Dakota Access pipeline protest camp on federal land in North Dakota, but it will be a while before the region returns to normal.There's tons of debris to be cleared. A... 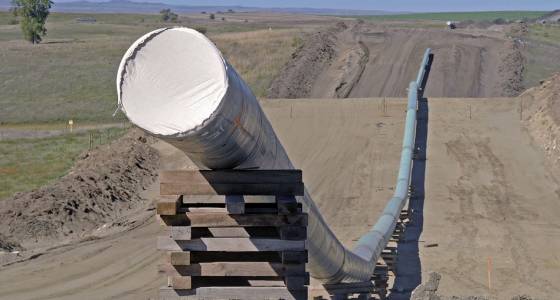 CANNON BALL, N.D. — Authorities this week cleared the last holdouts from a large Dakota Access pipeline protest camp on federal land in North Dakota, but it will be a while before the region returns to normal.

There's tons of debris to be cleared. A main highway bridge remains closed. Hundreds of protesters are still in the area. The pipeline operator is rushing to complete construction and says oil could flow within 10 days. Looming over it all is a still-unresolved court battle.

"This was beautiful North Dakota prairie in a sensitive watershed area," Gov. Doug Burgum said of the square-mile protest camp at the confluence of the Missouri and Cannonball rivers. "It's only use prior to this was for cattle grazing."

But since August, it was home to hundreds and at times thousands of people who support the claims of Sioux nations that the $3.8 billion pipeline to move North Dakota oil through South Dakota and Iowa to Illinois threatens drinking water, sacred sites and tribal religious practices. Texas-based pipeline developer Energy Transfer Partners disputes that.

The Army Corps of Engineers ordered the Oceti Sakowin camp closed Wednesday in advance of spring flooding. About 200 protesters left peacefully, with another 56 being arrested over two days for defying the order to leave. Federal Bureau of Indian Affairs officers at the same time cleared the much smaller Rosebud camp just to the south, on the Standing Rock Indian Reservation.

Many who left those camps planned to go to one of three nearby camps, all of which are on the reservation. Mike McCleary - Bismarck Tribune via AP A backhoe ripped through a building to begin the removal of Dakota Access protesters’ Oceti Sakowin camp in North Dakota.

"They can get us out of Oceti, but they can't stop what we started here," protester Kate Silvertooth, of Loveland, Colorado, said Friday while shopping at a convenience store near the reservation town of Cannon Ball.

The status of the remaining protest camps is uncertain.

The longstanding Sacred Stone Camp has swelled to about 550 people with the influx of about 150 people this week, according to Joye Braun, a protest leader. But whether that camp and another known as Seventh Generation Rising are on private land or tribal land is in dispute. Protesters haven't been able to get into another camp established on private land by the Cheyenne River Sioux because of an Indian affairs bureau roadblock. The Standing Rock Tribal Council also has made it clear it wants all of the camps to shut down.

"We are working with the tribe and the Bureau of Indian Affairs" on an agreement to resolve the situation, Braun said.

Oil could be flowing through the pipeline as soon as March 6, according to William Scherman, an attorney for the pipeline operator.

The company has finished drilling the main hole under Lake Oahe and will soon be laying pipe under the Missouri River reservoir — the last stretch of the 1,200-mile pipeline.

The company got permission for the lake work last month from the pro-energy Trump administration, but American Indian tribes continue fighting in court. The Standing Rock and Cheyenne River tribes have asked U.S. District Judge James Boasberg to overturn permission for the river crossing. Several groups including the National Congress of American Indians along with 34 other tribes on Thursday filed a court brief supporting the request.

Boasberg has scheduled a hearing Tuesday on a request from the Cheyenne River tribes to issue an injunction stopping the pipeline work.

Meanwhile, workers are racing against time to clean up hundreds of tons of debris at the camp before spring melt floodwaters wash it into the rivers. Trash and structures need to be cleared, some garbage will have to be dug up, and soil contamination from such things as fuel and human waste might also need to be removed.

"This isn't just high school kids picking up garbage in a ditch along the road," Burgum said.

The cleanup could cost federal taxpayers as much as $1.2 million, according to Corps Col. John Henderson. Crews hope to complete the work in about a month.

There's no set date for the reopening of a bridge on a main state highway outside the closed camp. The bridge has been closed since fires were set there in late October. It's being reopened in stages, with emergency vehicles currently the only ones allowed through.