MANILA, Philippines — Abu Sayyaf extremists in the Philippines released a video showing the beheading of a German hostage in the first sign the brutal Filipino militants carried out a threat to kill him after a ransom deadline lapsed over the weekend.President... 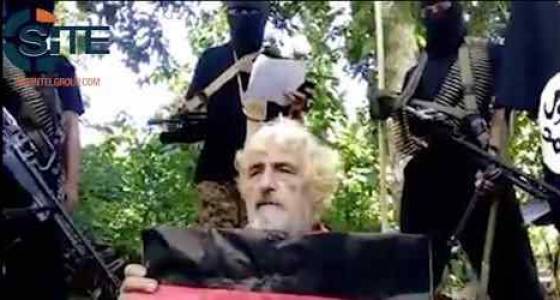 MANILA, Philippines — Abu Sayyaf extremists in the Philippines released a video showing the beheading of a German hostage in the first sign the brutal Filipino militants carried out a threat to kill him after a ransom deadline lapsed over the weekend.

President Rodrigo Duterte’s adviser dealing with Muslim rebel groups, Jesus Dureza, condemned the killing of Jurgen Gustav Kantner as barbaric, saying the Philippine military and other groups “exhausted all efforts to save his life” up to the final moment.

“We grieve as we strongly condemn the barbaric beheading of yet another kidnap victim,” Dureza said in a statement. “We all tried our best. But to no avail.”

The brief video circulated Monday by the SITE Intelligence Group, which monitors jihadi websites, shows Kantner sitting in a grassy clearing and saying “Now he kill me” shortly before a masked militant beheads him with a curved knife.

A few gunmen mutter “Allahu Akbar,” or “God is great,” in the video that lasts a minute and 43 seconds.

The Philippine military confirmed Kantner had been “mercilessly and inhumanly murdered.”

“Our operations in the past several days and nights using all our resources were unrelenting. We lost some of our best men in the process, because we value the life of Mr. Kantner and that of the others who have fallen prey to this terrorist group,” spokesman Col. Edgard Arevalo said in a statement.

An intelligence report seen by The Associated Press said an Abu Sayyaf militant, Moammar Askali, had wanted Kantner to be killed as announced but others wanted to wait out for a ransom payment. The militants circulated a video earlier this month in which Kantner said he would be killed if ransom was not paid by 3 p.m. Sunday.

Philippine officials have said the militants were seeking a ransom of 30 million pesos ($605,000).

In Germany, Foreign Ministry spokesman Martin Schaefer said German experts were evaluating the video to determine whether it was authentic, but that if it was, it’s “deeply shocking.”

“It makes you question what can lead people to commit such a barbaric crime, but, at the moment, I’m not in a position to say whether the video’s authentic,” he said.

He would not give any details on possible negotiations with the kidnappers, including whether there was a ransom demand, citing government policy and saying that “public comment never helps in finding a solution” in such cases.

Abu Sayyaf claimed in November that its gunmen had kidnapped Kantner and killed a woman sailing with him off neighboring Malaysia’s Sabah state. Villagers later found a dead woman on a yacht with the German flag off Laparan Island in Sulu province in the southern Philippines, the military said.

Kantner and his partner, Sabine Merz, were taken hostage by Somali pirates in 2008 and later freed, officials said.

The Abu Sayyaf, which the U.S. and the Philippines have blacklisted as a terrorist organization, is holding more than 20 foreign and local hostages in jungle encampments in the country’s south. They beheaded two Canadian men last year after separate ransom deadlines lapsed.

Duterte has ordered troops to destroy the Abu Sayyaf extremists, saying their ransom kidnappings were embarrassing and were creating a security alarm in the waters bordering the south, Malaysia and Indonesia. The three countries have made efforts to jointly shore up security along their busy sea border but the kidnappings by the Abu Sayyaf and allied gunmen of passing crews have persisted.