Famagusta 14°
overcast clouds
BUSINESS EDUCATION ENTERTAINMENT HEALTH POLITICS SCIENCE SPORTS TECHNOLOGY
10:22 Four Benefits of Hiring a Dedicated Development Team
04:48 Mark Kelly, President of Safety Marking Inc., Discusses Structuring Effective...
17:58 Trump wants to play golf at the Biden swearing-in in Scotland - but is...
17:54 First doubts Regarding tightened Steps: two National Countries Extract...
10:39 Covid-19 : in France, the end of containment and entry into force of the...
04:34 The schools of Rome will use the Internet with light bulbs: what it is...
10:58 Kratom Tea: How Is It?
11:46 Office Furniture Products for you!
12:17 Top Clubs, Their Value, Revenue And Current Standings
11:14 Reasons Why Rewarding Yourself is a Good Practice
BIST
1534
GOLD
438.859
USD
7.4163
GPB
10.1142
EUR
9.0177
Breaking News
Which Cake Flavours Do Americans Like Most?
Close

Former U.S. Labor Secretary Thomas E. Perez emerged Saturday from a bruising internal fight to become the next chairman of the Democratic National Committee, a job that will put him at the forefront of rebuilding the party and confronting President Donald... 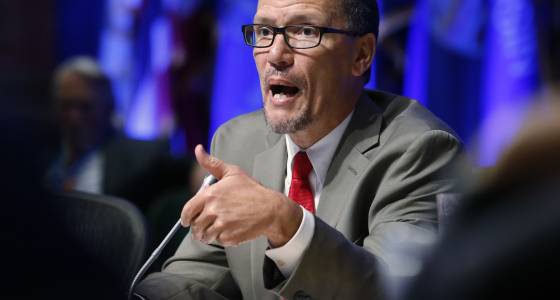 Former U.S. Labor Secretary Thomas E. Perez emerged Saturday from a bruising internal fight to become the next chairman of the Democratic National Committee, a job that will put him at the forefront of rebuilding the party and confronting President Donald Trump.

Perez, a Takoma Park resident and former Maryland state official, won an election that some read as an extension of last year's messy Democratic primary, in which left-leaning supporters of Sen. Bernie Sanders sought to take the party in a different direction than centrist backers of Hillary Clinton.

Bridging that lingering divide, while also addressing last year's unexpected defeat, will be among Perez's top priorities. Many Sanders supporters are still angered over hacked emails released before the election that showed party officials — ostensibly neutral in a primary — pulling for Clinton.

Setting the agenda at the national level, meanwhile, will almost certainly keep Perez from running for governor in 2018, a prospect that had excited many state Democrats. The party is searching for a candidate to unseat Republican Gov. Larry Hogan, who remains popular.

"They're going to study this era in American history, and they're going to ask the question of all us: 'Where we you in 2017, when we had the worst president in the history of the United States?'" said Perez, 55, who is the first Latino to hold the job. "And we will all be able to say ... the united Democratic Party led the resistance."

U.S. Labor Secretary Thomas E. Perez, one of several candidates running to lead the Democratic National Committee, said Monday he would use the position to expand the party's efforts to protect voters in the wake of ballot laws cropping up across the country.

U.S. Labor Secretary Thomas E. Perez, one of several candidates running to lead the Democratic National Committee, said Monday he would use the position to expand the party's efforts to protect voters in the wake of ballot laws cropping up across the country.

He called for a "course correction" in a number of states, including Maryland — a reference to Hogan's win in 2014.

But Perez will have a number of big tasks to complete first before reaching that goal.

"The first goal will be to bring the party together," said Quincey Gamble, a strategist who has worked for both the national and state parties. "One thing about a race for chair is that folks choose sides, and even though there's very little that separates us ideologically, it's still going to be a task."

Both Perez and his leading opponent, Minnesota Rep. Keith Ellison, had rejected the left-versus-centrist narrative that developed around the race, and close observers described it as overblown. Both men are progressive Democrats, but Perez was seen as more of an inside player because of his long tenure in President Barack Obama's Labor and Justice departments.

The Feb. 24 White House press briefing, normally open to all reporters with press credentials, was an exclusive event for certain outlets handpicked by the administration.

The Feb. 24 White House press briefing, normally open to all reporters with press credentials, was an exclusive event for certain outlets handpicked by the administration.

Ellison, who was backed by Sanders, was viewed as more of an outsider. Pete Buttigieg, the 35-year-old mayor of South Bend, Ind., tried to angle his campaign between those two positions, casting himself as a fresh voice unencumbered by the internal tensions of the past.

Buttigieg dropped out of the race Saturday before voting began.

Republicans predicted the Democratic Party would distance itself from independent Trump voters by choosing a chairman who was among the most liberal members of Obama's cabinet and a "D.C. insider."

"Voters spoke loud and clear last November that they wanted a change in Washington and to reverse the failed policies of the last eight years," Republican National Committee Chairwoman Ronna McDaniel said in a statement. "The DNC would be well-served to learn from two straight election cycle losses."

Perez narrowly lost the first round of balloting at the party's meeting in Atlanta on Saturday, coming up one vote shy of the 214.5 votes needed. He won the second-round ballot with 235 votes compared with 200 votes for Ellison.

Several Democratic analysts agreed on the importance of uniting the party's factions, but that's far from Perez's only difficult task. He must also figure out how Clinton lost working-class voters in states like Michigan, Pennsylvania and Wisconsin — which had voted for Democrats for years — and how to get them back.

That involves crafting an economic message that Democratic strategist Justin Schall said Perez may be uniquely qualified to do, given his background.

"He needs to reach out to working class, middle Americans," Schall said. "It's really easy after a race like this to cater to the extremes...He can be a force to unite if he chooses — and that's what we need."

Under Perez's guidance, the Labor Department approved several regulations, such as extending overtime pay to millions of Americans and requiring financial advisers to operate in their clients' best interests. The first was blocked in court — it is not clear if the Trump administration will defend it — and the White House has put implementation of the second on hold.

But a significant part of Perez's job will be mechanical, analysts say. All of the candidates who ran to lead the party discussed building up local and state operations in an effort to increase the number of Democrats running for local office and also to ensure that Democrats turn out to support the party's next presidential nominee.

"The key part of his job is building an infrastructure plan for the Democratic Party — and not a plan that just gets us to 2020 or 2018 but one that is sustainable for the next 10 to 15 years," said Lisa Bianco, a Democratic operative based in Maryland.

Leading up to 2016 election, there was considerable discussion that Democrats could expand their support in traditionally Republican states like Georgia, Arizona and Texas — all of which ultimately went to Trump. Bianco said Democrats have an opportunity to continue to work toward that goal, even while they patch up the "blue wall" of Democratic states that ultimately crumbled last year.

"How do we expand our into those areas where we feel like we have an opportunity," she asked. "His job is to figure out, over the next however many years, how we make those things a reality."

Perez's father died of a heart attack when he was 12 years old. The Buffalo, N.Y., native put himself through college with scholarships and worked as a trash collector and warehouseman.

He ran for Maryland attorney general in 2006 but was knocked off the ballot by the state's Court of Appeals, which held he lacked the 10 years of legal experience required by the Maryland Constitution. Douglas F. Gansler was elected to the post instead.

Former President Barack Obama predicted Perez would unite the party "under that banner of opportunity, and lay the groundwork for a new generation of Democratic leadership."

Voting for the the party's secretary position was expected later Saturday. Former Baltimore Mayor Stephanie Rawlings-Blake, the incumbent, is running for re-election.