ATLANTA >> The race for a new Democratic chairman narrowed to two candidates, a former Cabinet member and a liberal Minnesota congressman, both of them promising to rebuild a reeling party and fight Republican President Donald Trump.Tom Perez, labor... 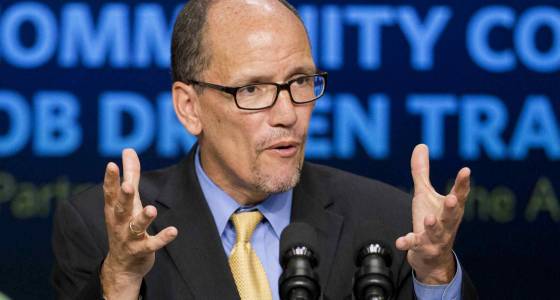 ATLANTA >> The race for a new Democratic chairman narrowed to two candidates, a former Cabinet member and a liberal Minnesota congressman, both of them promising to rebuild a reeling party and fight Republican President Donald Trump.

Tom Perez, labor secretary under former President Barack Obama, told Democratic National Committee members the party is facing a “crisis of confidence” and a “crisis of relevance” after losing about 1,000 elected posts from Capitol Hill to state legislatures during the last decade, in addition to Hillary Clinton’s presidential election loss in November.

“We need a chair who cannot only take the fight to Donald Trump but make sure that we talk about our positive message of inclusion and opportunity and talk to that big tent of the Democratic Party,” Perez said.

The other top contender, Minnesota Rep. Keith Ellison, said Democrats “are the ones who are going to stand up, rise up and protect the American people.”

Other candidates will address the gathering before ballots are cast Saturday afternoon.

Mayor Pete Buttigieg of South Bend, Indiana, dropped out of the race Saturday just ahead of the first round of voting. He had hoped that neither Ellison nor Perez could reach the required majority, opening the door in later rounds of voting for a third option.

Buttigieg did not endorse Perez or Ellison.

With six candidates remaining on the ballot, there still could be at least two rounds of voting before Perez or Ellison wins.

The chair campaign has been uncharted territory as Democrats face a power deficit not seen in nine decades — beyond the lifetimes of virtually every American voter. Republicans control the White House, Congress and about two-thirds of U.S. statehouses. The GOP is one Senate confirmation fight away from a conservative majority on the Supreme Court.

With Democrats in agreement in their opposition to Trump, the race is likely to turn on who convinces enough DNC members to believe in his or her promises of rebuilding party infrastructure that withered under former President Barack Obama despite his personal electoral success.

Ellison told voting members he has signatures from 750,000 rank-and-file Democrats who support his chairmanship bid. He promised to “convert them from demonstration energy to electoral energy.” He pledged to prioritize small donations to finance the party, while working to “organize this whole country.”

As he withdrew from the race, Buttigieg suggested that Democrats already have options for those races. “There’s nothing wrong with our bench,” said the 35-year-old mayor, pegged as a likely statewide candidate in Indiana. “We just haven’t called enough people on the bench ... and asked them to get out on the field.”

Perez got into the race at Obama’s urging, but he has pushed back on the notion that represents the same “establishment” label that dogged Hillary Clinton’s presidential campaign. Ellison has endorsements from Vermont Sen. Bernie Sanders, who challenged Clinton for the Democratic nomination, and also from Senate Minority Leader Chuck Schumer.

For their parts, Ellison and Perez have praised each other and promised unity regardless of the outcome.

Party chair races usually aren’t undecided when the actual voting starts, because a leading candidate usually emerges to make the ballots a formality. This time, the uncertainty has party staff and 442 eligible DNC members dusting off complicated rules that usually don’t matter.

For example, party officials expect about 70 or 75 members to be absent. Nearly all have designated another member to cast paper proxy ballots on their behalf. But that also adds a layer of suspense: Members in attendance will vote electronically, with quick tallies, while the paper proxies must be counted by hand.

The winner will succeed outgoing Chairwoman Donna Brazile, who led the party as interim chief in the fallout from disclosure that internal party communications were stolen by hackers and leaked during the 2016 presidential campaign.

Brazile said Saturday the party has worked with cybersecurity experts to address vulnerabilities. She chided Trump for his mockery of DNC cybersecurity and his doubts that Russians are at fault.

“No, Donald Trump, you can’t go to Staples and buy anti-Russian hacking software,” she said, urging Congress to investigate whether Russians hacked the Republican National Committee.

No RNC emails were leaked during the 2016 campaign. Republican officials insist their party communications were not breached.