Joseph A. Wapner, a retired California judge whose flinty-folksy style of resolving disputes on the show "The People's Court" helped spawn an entire genre of courtroom-based reality television with no-nonsense jurists and often clueless litigants, died... 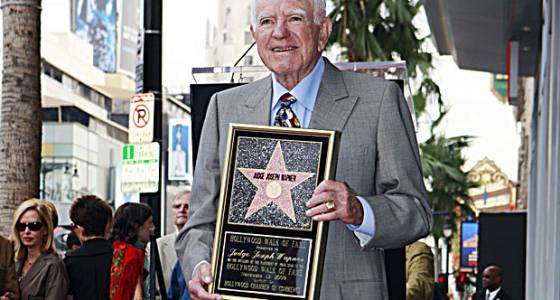 Joseph A. Wapner, a retired California judge whose flinty-folksy style of resolving disputes on the show "The People's Court" helped spawn an entire genre of courtroom-based reality television with no-nonsense jurists and often clueless litigants, died Feb. 26 at his home in Los Angeles. He was 97.

A grandson, Gabriel Wapner, confirmed the death but did not know the immediate cause. Wapner had had several strokes in recent years.

"The People's Court," which the silver-haired Wapner hosted from 1981 to 1993, was a syndicated half-hour show that turned private arbitration of small-claims cases into highly engrossing entertainment.

Within a few years of its debut, the program regularly attracted 20 million viewers. One measure of its success was a Washington Post survey in 1989 that showed 54 percent of Americans could identify Judge Wapner compared with 9 percent who could name the chief justice of the U.S. Supreme Court, William H. Rehnquist.

Wapner so permeated the popular culture that he became a reference point in the Oscar-winning film "Rain Man" (1988), in which Dustin Hoffman's autistic character is addicted to "The People's Court."

Hoffman was reputedly a fan in real life, and Wapner's admirers included several members of the Supreme Court. Justice Byron R. White reportedly went to lengths to wangle an invitation when the TV judge came to speak in Washington.

For a viewing audience weaned on courtroom dramas such as "Perry Mason," the Wapner program was a stark departure. Instead of invented murder and mayhem, "The People's Court" featured unscripted, real-life grievances between plaintiffs and defendants who could be tangent-prone, inarticulate or alarmingly naive.

Disputes centered on nonpayment for goods and services, unwise lending of money to shady friends and family members, purchases in which the buyer did not beware and altercations between people and their neighbors' animals.

The parties, selected from the dockets of Los Angeles-area small-claims courts, agreed to have their matters settled outside a normal court of law and to sign a legally binding arbitration contract. Each litigant was paid about $250 to appear on TV.

The courtroom set -- the only fictional component of the show -- was presided over by a seen-it-all judge who had spent 18 years on the bench of the Los Angeles Superior Court and brooked little tolerance for unpreparedness and interruptions.

When a litigant told him, "I'm not through, your honor," Wapner replied, "Well, now you are."

"It's a case that requires proof, and you didn't even tip the scales," he told one woman seeking redress for damaged furniture and stolen underwear during a move.

He brought basic judgment and a sense of perspective to thorny legal feuds. Evidence such as receipts and written contracts were often a deciding factor. The judge decided that a litigant who bought three "Cartier" watches out of a cigar box in a restaurant for $75 got exactly what he purchased.

Although he could be gruff, Wapner also displayed a sense of fairness in Solomon-like conundrums.

The judge was frequently mentioned -- often for laughs, but often not -- as a candidate for the Supreme Court. He tended to dismiss such talk, and he turned down requests to appear as himself on shows he considered undignified, such as "Saturday Night Live." (He said his children never forgave him for that.)

Instead, Wapner parlayed his celebrity into speaking engagements on Ivy League campuses and before legal groups. He took his picture with anyone who requested it. His rationale for doing the show in the first place was to enlighten as many people as possible "in the judicial process of arbitration and how to conduct yourself in court."

"The People's Court" featured a small cast of regulars: Rusty Burrell, a retired sheriff's deputy and sometime actor, as the mild-mannered bailiff; and Doug Llewelyn, a former TV correspondent, as the host who introduced the case and interviewed the parties about the final decision. Behind the scenes, the show's legal adviser was a former law professor, Harvey Levin, who went on to start the celebrity gossip empire TMZ.

But Wapner was the undisputed star, and his demeanor helped set the template for many of the legal reality shows that followed.

In 1984, Joseph Wapner of the "People's Court" TV program posed in front of the Supreme Court in Washington.Gerald Martineau/The Washington Post

"He behaved like a judge who had been on the bench a little too long, and that's what made it work," said Robert Thompson, a television and pop culture scholar at Syracuse University. "It's hard to remember what a state of cultural virginity the American audience was in, in regards to what we'd call regular people -- nonactors without scripts.

"It turns out regular people are whiny, petty, annoying folks, so Judge Wapner's crotchety grouch thing was just what we wanted -- to shut them up now and then."

Wapner's influence, Thompson added, extended not only to imitators who followed -- Judy Sheindlin of "Judge Judy," "Judge Mills Lane," "Judge Joe Brown," or even "Judge" Julie on Playboy TV's "Sex Court" -- but also to TV personalities such as Dr. Phil, who often viewed guests as squabbling children in need of a stern talking.

Joseph Albert Wapner, whose father was a lawyer, was born in Los Angeles on Nov. 15, 1919. He initially wanted to be an actor until a theater director at Hollywood High School said he had no talent.

He also recalled a humiliating date with a classmate, Judy Turner, who later changed her first name to Lana and became a movie star. He had noticed her -- "the most beautiful girl I'd ever seen" -- in the school library and proposed that they grab a Coke at a nearly drugstore. It didn't end well: He forgot his wallet, and she had to pay.

After graduating in 1941 from the University of Southern California, Wapner saw Army combat in the Pacific. While on Cebu, an island province in the Philippines, he was wounded by shrapnel from a grenade and risked his life to save a wounded soldier from being raked with machinegun fire. His decorations included the Bronze Star and the Purple Heart.

He received a law degree from USC in 1948 and spent 10 years in private practice before receiving a judicial appointment to the Los Angeles Municipal Court.

In 1961, he joined the Los Angeles Superior Court, and his peers elected him presiding judge several times, giving him oversight of more than 200 judges. He also served as president of the California Judges Association.

He wrote in his memoir, "A View From the Bench," that his blunt opposition to judicial salary cuts -- he once likened then-Gov. Edmund G. "Jerry" Brown Jr. to Mao Zedong -- likely cost him a promotion to the state appellate court.

Wapner retired from the Superior Court in 1979 and conducted private arbitration work specializing in divorce cases for $250 an hour. He negotiated a record-breaking $41 million settlement while handling the divorce of Washington Redskins owner Jack Kent Cooke from his first wife.

Outside the courtroom, Wapner could be found on another kind of court -- playing tennis. One of his tennis partners knew producers Ralph Edwards and Stu Billett, who were looking to create the program that became "The People's Court."

The producers were considering judges and law scholars, who seemed too dull. TV executives suggested a sitcom starring the verse-slinging comedian Nipsey Russell as a judge. After Edwards and Billett met Wapner, they felt they had achieved the right balance between legal prowess and broad appeal.

As Billett told the New Yorker: "Look at him. Isn't he just perfect? Look at those eyebrows. Look at that hair. You couldn't ask for anything better."

Survivors include his wife of 70 years, Mildred "Mickey" Nebenzahl of Los Angeles; two sons, Fred Wapner, a judge on the Superior Court of Los Angeles County, of Los Angeles and David Miron-Wapner of Jerusalem; a sister; and four grandchildren; and a great-granddaughter. A daughter, Sarah Wapner, died in 2015.

One of Wapner's most visible arbitration jobs occurred on "The Tonight Show" in 1986. Host Johnny Carson asked him to settle a dispute with late-night rival David Letterman: Carson had Letterman's beat-up truck towed from a street as an eyesore, and a headlight was damaged in the process.

Using Carson's desk as a makeshift bench, Wapner refused Letterman's bribe of a box of steaks ("Mr. Letterman, the price isn't right") but ultimately awarded him $24.95.