PARMA, Ohio - Frank Germane was 18 years old when he graduated from John Adams High School in 1942. In March 1943, he was drafted into the Army and served in the 70th Division artillery until he was discharged in April 1946. Now 92, Germane recently received... 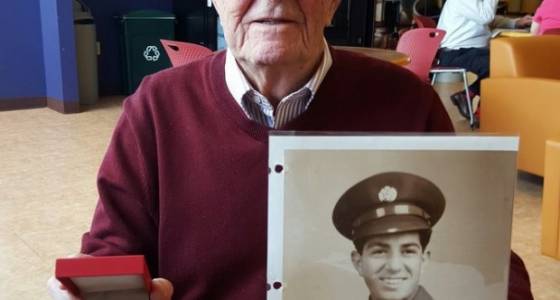 PARMA, Ohio - Frank Germane was 18 years old when he graduated from John Adams High School in 1942. In March 1943, he was drafted into the Army and served in the 70th Division artillery until he was discharged in April 1946.

Now 92, Germane recently received the Knight of the Legion of Honor medal from the French government.

He fought in what is considered "the other Battle of the Bulge." It was the last German offensive of the war. Germane, who eventually taught German and English in the Parma City School District, wants to set the record straight about his division's involvement in that battle, which took place New Year's Eve 1945, two weeks after the first Battle of the Bulge. A book about the offensive inadvertently left the 70th Division out of the account.

"For three weeks we were outside during the coldest winter Europe had seen in 40 years," Germane said. "My toes still hurt from the cold we had to endure."

After the Germans surrendered, Germane lived in Frankfurt among the defeated German people and learned to respect them as good people who had been lead astray by their Nazi leaders. He became fluent in German as a result of his time there. His final rank was a staff sergeant.

Germane and his wife, Joyce, have been married for 50 years and have one daughter, who lives in Strongsville. They have two grandsons.

Over the years, Germane kept in contact with two of his comrades in arms. One of them, Bill Kiefriter, lives in Philadelphia and is now 94. The other one, a Brooklyn, New York native, died recently, and Germane's eyes teared up when he spoke of him during our interview.

On the proclamation from the Consulat General de France that accompanied the medal, it reads: "France and Europe have been living in peace for the past seven decades. You saved us. We will never forget."

At the end of our conversation, Germane looked at me and said, "Now don't make me out to be a hero."

As has been written and said many times before by members of Germane's generation who fought in World War II, the real heroes are ones who never came home.

But we all should be proud and grateful for men like Frank Germane.