PARMA, Ohio - Although the Parma Area Chamber of Commerce's Pride Award Gala was held in Brooklyn at the Copper Stone Catering and Event Center, the spirit of community partnership rang true. A crowd of area politicians and business leaders and owners enjoyed... 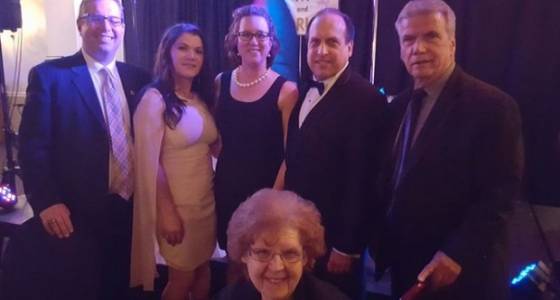 PARMA, Ohio - Although the Parma Area Chamber of Commerce's Pride Award Gala was held in Brooklyn at the Copper Stone Catering and Event Center, the spirit of community partnership rang true.

A crowd of area politicians and business leaders and owners enjoyed cocktails and a buffet dinner Feb. 25 at the newly renovated event center. Mayor Tim DeGeeter was the master of ceremonies and regaled his audience with his dry sense of humor and insider jokes. One would assume he was warming up for the "State of the City" address Feb. 28.

The Parma Area Chamber of Commerce serves Parma, Parma Heights and Seven Hills, and the 2017 Pride Award winners represent all three communities. The first recipient was the Shoppes at Parma in the business category.

Shoppes at Parma General Manager Michelle Devlin accepted the award and thanked the community for its enthusiastic response to all the new businesses that have opened in the past year. She mentioned that two more eateries will be opening soon. Firehouse Subs and Blazes Pizza are set to join the array of dining options already open for business.

The second recipient was Rosemary Gulick, a driving force in the Parma Schools for many years. Gulick taught first grade for 29 years, and she was named Ohio Teacher of the Year in 1988. She is currently serving on the Parma City School Board for her 16th year. She and her husband, Tom, have been married for 51 years.

The third recipient was Fratello's Pizza, which is owned by Mimoza Hajdari and her family. The business took over a former Arthur Treacher's restaurant on W. 130th near Smith Road and turned it into a thriving enterprise with a beautiful front patio.

A splendid time was had by all.