There he is, smiling. Doug Courtemarche wears it like a brand-new suit, fresh off the rack, and never takes it off. It could be cloudy, rainy, colder than an assassin’s gaze, but the corners of his mouth remain up. Courtemarche could have a knife sticking... 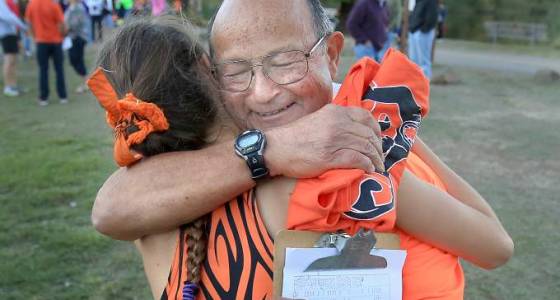 There he is, smiling. Doug Courtemarche wears it like a brand-new suit, fresh off the rack, and never takes it off. It could be cloudy, rainy, colder than an assassin’s gaze, but the corners of his mouth remain up. Courtemarche could have a knife sticking out of his foot, but he wouldn’t stoop down to remove it: Please, finish your sentence, I don’t want to interrupt.

“Doug is irrationally cheerful,” said Peter Brewer, the track and field and cross country coach at Castro Valley High School, a longtime opponent and admirer of his counterpart at Santa Rosa High. “I’m completely envious of his attitude.”

Of course, you believe a blanket statement like you believe Barry Bonds when he said he never took steroids. You initially disbelieve bold proclamations because they create immediate suspicion. You want more proof. Courtemarche gave it.

Courtemarche, 69, pointed to his left foot. It’s encased in a stabilizing boot. Hurts every time he walks. It should.

His left hand slid across the top of his right hand.

Thus begins the explanation for why the high school is honoring Courtemarche this Saturday at the Big Cat track meet. It’s not because the man is retiring; he wants to go a couple more years. It’s not because he’s in failing health; he treats these surgeries as a mere fever blister. It’s not because teenagers have worn him out; adolescents are the caffeine that gets him going.

It’s that Courtemarche is finishing his 25th consecutive year in a sport far from the maddening headlines. It’s not football or baseball or basketball or soccer. Not even hockey. It’s a sport that demands exertion, so back off from those pancakes, dude, if you want to make this dance. There are no timeouts. No one flops in track and field unless it’s a high jumper. Sweat equity is the currency of the day. You don’t sprint to first base; you run miles.

Yet, on average, 100 kids turn out for the first practice every year at Santa Rosa. That’s more than any other sport in high school. Sure, it’s one team. No freshman or junior varsity teams in this sport. Sure, some kids turn out to fulfill their physical education requirement (95 kids are still on the team).

So Santa Rosa has had the same coach for 25 years. Oh, that seven schools in Sonoma County would like to say the same thing about their head football coach, seven having departed since last season.