Galleries Videos Authors Polls
Famagusta 21
clear sky
BUSINESS EDUCATION ENTERTAINMENT HEALTH POLITICS SCIENCE SPORTS TECHNOLOGY
09:26 Giro d'Italia 2022: Schedule, route, profile and where to watch stage...
09:01 The deadline for Andalusians residing abroad to request a vote by mail...
08:16 Miró and Chillida meet again in Zabalaga
07:15 Eugenio Recuenco presents
06:15 The difficult digestion of Barça after falling in the
05:26 This is what the 4,500-year-old droppings found at Stonehenge explain
04:45 Russia will create 12 new military units for the future expansion of NATO
03:21 The TSJ of Madrid condemns the former number two of the Police for the...
02:15 Why loans with very low payments are a bad idea
01:55 Four injured by stabbing in a stab attack in Norway
BIST
2.375,00
GOLD
964,56
USD
16,11
GPB
20,28
EUR
17,32

When Hollywood screws up, somehow it turns out better than when America does.“Moonlight” wasn’t supposed to win the 89th Academy Awards’ best picture Oscar, and was actually told that it didn’t at Sunday night’s ceremony.But... 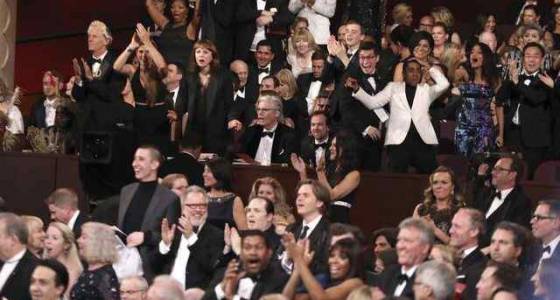 When Hollywood screws up, somehow it turns out better than when America does.

“Moonlight” wasn’t supposed to win the 89th Academy Awards’ best picture Oscar, and was actually told that it didn’t at Sunday night’s ceremony.

But then we were told that it did. And in a politically poisonous season following two years’ worth of perceived academy racism, the poetic little film about the gay black kid prevailed. Prevailed against racism and homophobia, if you like. Prevailed against the academy’s traditional inability to appreciate the most artistically accomplished of its best picture nominees, to be sure. Prevailed against whatever caused the initial mistake.

Whatever. It was all kind of glorious in its sweet, screw-up humanity.

I’m guessing some on the “Politically Correct”-shouting-and-hating end of the spectrum are hatching their conspiracy theories while I write this. But while it might just be me, what I expected to be the most politicized Oscar show of them all didn’t seem all that unusually partisan, preachy or screechy. I mean, blue ACLU ribbons? Host Jimmy Kimmel tweeting at Donald Trump? Don’t hit too hard, people.

The awards themselves, however, spoke somewhat more eloquently to the embattled values of inclusion and diversity most of liberal Hollywood holds dear. Not only did the all-black film take the top prize, but after two straight years of #OscarsSoWhite, both supporting acting awards went to African Americans at the top of their games, “Fences’” Viola Davis and “Moonlight’s” Mahershala Ali. White folks still nailed the top performing prizes — nobody ever accused Hollywood of practicing what it preaches — but, and I’m not being all that sarcastic here, there’s also something kind of inclusive about handing performing Oscars to a good actress like Emma Stone who can’t sing or dance that well and to, well, an Affleck.

“Moonlight’s” adapted screenplay-winning writers certainly said what needed to be said, as their beautiful movie, which would have won more than two awards if the Oscars were really about art, so poetically did.

I guess not giving every dang statue they could to “La La Land” and spreading the wealth — sometimes to a fault — among 10-plus different feature films was also a nice example of diversity.

A night-topping six prizes out of 14 nominations, including director for the youngest-ever winner Damien Chazelle, seem about right for that very artfully done, very Hollywood-pandering, not entirely escapist musical. We’ve all got bigger things on our minds right now, but “La La” proved that “mindless” and “entertainment” need not always go together like Fred and Ginger. And talk about gracious losers; sometimes movie people really do set an example for the world.

Bringing the real hidden figure and true NASA hero Katherine Johnson onstage was certainly predictable, but was so for all the most positive reasons. The feature documentary winner that followed, “O.J.: Made in America,” was of course another inspiring choice, socially speaking. That it was essentially a long-form television production hints that maybe the theatrical-bound academy is grudgingly acknowledging that the barriers that guard movies from other forms of filmed storytelling are crumbling as surely as our quaint notions of the Constitution.

Most any of the documentary short subject nominees would’ve been politically correct, but winner “The White Helmets” — some of the participants of which got caught in the Muslim ban — sent the strongest message. Hopefully it was received in spite of the category’s modest nature.

There was foreign language film Oscar-winning director, Asghar Farhadi’s, letter read from the stage as to why he wouldn’t come to our Muslim-banning country’s showbiz self-love fest. The “Zootopia” animated feature winners said yay for tolerance, but they would have any other year, wouldn’t they?

Kimmel bringing those unsuspecting tour bus riders into the Dolby was either a nice act of populism or kind of condescending, probably both. Still, that couple from Chicago made it the most fun moment of the night.

Some of the awards had that kind of “what were they intending?” vibe too. While the statuettes that went to “Suicide Squad” and “Fantastic Beasts and Where to Find Them” may or may not have been deserved in their respective makeup and costume categories, they felt like Oscar saying, “Yes, this thing is so inclusive now, even bad movies get prizes.”

And with two Oscars going to “Hacksaw Ridge,” is Mel Gibson a sure thing to direct that “Suicide Squad” sequel now? And win still more Oscars! I joke, sorta, but if Hollywood is this forgiving, Trump might still have a chance at a future Emmy.

In the end, that progressive and faux Kimmel nemesis Matt Damon got dissed more than Trump on Sunday night. So I guess all those conservatives who boycotted watching the lefty Oscars missed out on all the fun.

And yeah, it was fun. Candy, cookies and doughnuts. Embarrassing yet exhilarating finish. What Hollywood does best, and that was fine in these disheartening times.

Next year, though, I expect the Oscars to really let ’em have it.