The Orioles have been waiting a long time to take the wraps off of Dylan Bundy.He was always projected as a starting pitcher – and perhaps a legitimate ace – but everyone knows the hurdles he had to clear to get into the rotation last July and to arrive... 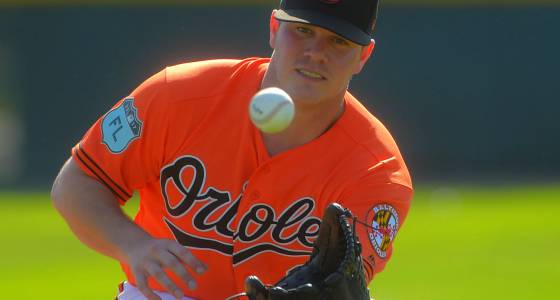 The Orioles have been waiting a long time to take the wraps off of Dylan Bundy.

He was always projected as a starting pitcher – and perhaps a legitimate ace – but everyone knows the hurdles he had to clear to get into the rotation last July and to arrive at spring training this year as the presumptive No. 3 starter.

When he took the mound against the Boston Red Sox on Wednesday at Ed Smith Stadium, it was his first exhibition start since 2013.

Bundy got off to a bit of a rocky start, allowing a two-run home run to Andrew Benintendi in the first inning. But he settled in to pitch two innings and allow just one earned run on two hits. He threw 38 pitches and struck out two.

“Knocked the nerves out of there," Bundy said. “I was just happy with the way I controlled the fastball. I thought I did a decent job of throwing strikes and getting ahead of batters and staying ahead. I just threw one pitch right down the middle and he was able to hit it out.”

He depended heavily on his two-seam fastball and unveiled his “cutter-slider,” the pitch that the club had been hesitant to let him throw in the past because of the possible strain it might put on his elbow.

“I was getting around it today. … It wasn’t what I wanted, but it was the first time I was really throwing at game speed so I learned something and now I’ve got to work on it," he said.

Bundy reminded everyone that he gave up a home run to the first batter he faced last spring – then-Tampa Bay Rays outfielder Brandon Guyer. This time, leadoff hitter Mookie Betts reached first on a throwing error by Chris Johnson before Benintendi homered to right.

The organization has been carefully monitoring Bundy’s innings since he was the 18-year-old flame-throwing phenom they drafted with the fourth overall pick in the 2011 draft. That didn’t keep him from having to undergo Tommy John elbow reconstruction, but he won a place in the major league bullpen last year and appears ready to start 2017 without defined restriction.

“We have to protect our assets, and they’re our players. I don’t apologize for being cautious with them. Right now, he’s going to be one of our four pitchers coming out of camp.”

Showalter bristled a bit when he was asked before Wednesday’s game whether he felt certain that Bundy’s physical problems are completely behind him.

“No, of course not; it’s the human body," Showalter said. “We’re doing something every day we’re not [designed] to do. You never know. I don’t know. I just hope my knee replacement holds up for one more day. … I can’t sit here and say, ‘It’s over. … It’s all behind him.’ I’m hoping we’re having the same conversation about Hunter Harvey next year.”