Orioles' Bourn on football-related injury: 'That’s the risk you take, so you have to live with it.'

Over the course of his career, Orioles outfielder Michael Bourn said he has done several drills to improve his speed, and playing catch with a football following Friday’s workout seemed harmless enough.  But the activity will cost Bourn most of spring... 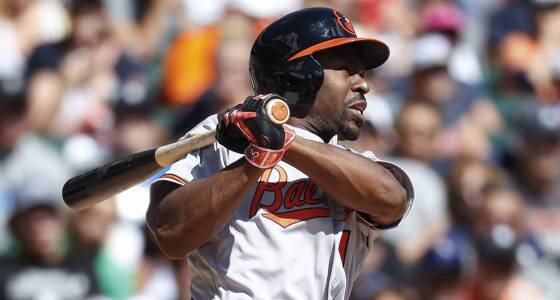 Over the course of his career, Orioles outfielder Michael Bourn said he has done several drills to improve his speed, and playing catch with a football following Friday’s workout seemed harmless enough.

But the activity will cost Bourn most of spring training, as he is out four weeks after suffering a broken right ring finger from jamming it while catching a football. The fracture is located on the inside of the knuckle.

“Thousands of times,” Bourn said Sunday when asked how many times he’s caught a football in his life. “Never had it happen to me, but it happened this time. That’s the risk you take, so you have to live with it. I made this bed, so I have to lay in it.

“I wasn’t football for fun, first off,” Bourn added. “I was doing it for conditioning. It was just a conditioning drill that you do and the ball just hit me in the wrong spot. I thought it was a jam at first, but I kind of knew. It hurt kind of bad, more than a jam.”

Now the 34-year-old Bourn, who signed a minor league deal with a big-league spring training invite Monday after going unsigned all offseason, must wait until at least late March to play in his first spring training game.

“Of course it’s frustrating, you know,” Bourn said, his finger in a splint. “You think about it and all the stuff you were doing to get prepared, and I was ready to go and pretty much ready to get into games the next couple days and now I’ve got to wait a little bit longer. I’ve got to wait about four weeks to heal. I want it to heal correctly but I want to push it too. There’s really nothing I can do about it. I wish I had a time clock so I could turn back the hands of time, but I know time rolls forward so you can’t look at it like that. Just push forward and we’ll see what happens and we’ll see what they want to do and go on from there.”

Bourn said he was playing catch with the football as a drill to help with his first-step quickness, which is an instrumental part of his game and one of the major reasons the Orioles signed him to improve their outfield defense and speed on the bases.

“I like to change stuff up so it’s new to you, it’s exciting," Bourn said. "... It’s about breaks out of a route, it’s about little things you do when playing baseball, but you’re just doing it in a different style. Kind of keep your athleticism, and I’m a big person who likes to keep my athleticism because I think it helps me on the field a lot. Just moving around in different kinds of ways helps me be athletic when I’m in the outfield and I think that’s a big thing. Especially as you get older you have to continue, the things you have to do as you get older, you have to work a little bit harder and keep your body in athletic shape, because if you don’t you’re going to lose that first-step quickness."

Bourn wouldn’t say who threw the pass or whether footballs have been removed from the Orioles clubhouse. Asked if he was done with football, he said, “I’ve been done with football. I was just doing it for conditioning.” Bourn did play football in high school in Houston.

Meanwhile, Bourn said he will still be able to do conditioning drills to get his body in shape for the season, but won’t be able to throw or hit until his thumb heels.

“That’s the only thing I can’t do, but that’s baseball, pretty much,” Bourn said. “We’ll see. I’ll see how much pain I can tolerate as time goes on. We’ll see what happens. At first, I was a little frustrated when it first happened, but as time went on throughout the day, I can’t turn it back. I know I wasn’t doing nothing to where I was like messing around and joking around. Continue to work, and it happens.

“I’ll be in shape,” Bourn added. “That’s not a question about that part. That part is no question, but just about getting into baseball shape. Seeing pitching in spring training is a big thing."

The injury will have an impact on Bourn’s contract status because he has a March 27 opt-out, and it’s uncertain whether he will get into any spring games by then.

“We’ve still got four weeks until it heals," Bourn said. "Once that happens, I’ll let it heal and we’ll see. If it heals quicker, I might play in a couple games. If it doesn’t, I have to wait until it’s healed to where I can tolerate it with the bat. And I’ll take it from there. You’re right. I do have the opt out. I know that. The team knows that. So we’ll get together and see what happens.”

Britton feeling better: Orioles closer Zach Britton said the discomfort he was feeling in his side is mostly gone, and was planning to play catch on Sunday.

"I feel pretty good," Britton said. "I think it’s pretty much all the way gone. I think the plan is to play catch and then see how it feels and kind of goes from there. So, nothing beyond today. But I’m going to go out there, team stretch and then play some catch.”

It's unclear when Britton will pitch in his first spring game, but he said he's not concerned because he didn't pitch until March 2 last spring.

"When we came to camp we had about a week before we were in games, so that’s a little bit quicker than normal," Britton said. "There wasn’t any plan to throw before the 2nd or 3rd, maybe a little later.”