Scan the lockers at the back of the Orioles clubhouse at Ed Smith Stadium, where the team's catchers are lined up in a row, and there's no greater representation of how the position has changed, both around the game and in this organization.The Orioles'... 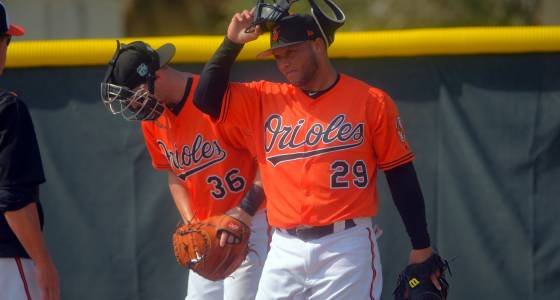 Scan the lockers at the back of the Orioles clubhouse at Ed Smith Stadium, where the team's catchers are lined up in a row, and there's no greater representation of how the position has changed, both around the game and in this organization.

The Orioles' camp roster this spring featured myriad catchers — defensive studs, strong hitters and overall label-dodgers — each working toward improving the one thing needed to solidify himself as a major leaguer, and each going about it in his own way.

Their presence represents not only a testament to the drafting and development at the position, but also a massive upgrade in catching options as the team confronts life without Matt Wieters going forward.

"When we first started here, it was a challenge for us," manager Buck Showalter said. "It was Matt, then hold your voice down. It's hard to find. It's become a strength, the depth of the catching."

"Of course, the loss of Wieters stings, but you have quite a few options that bring a little bit of something different every time," catcher Caleb Joseph said. "I think the experience factor is the one thing that's missing. Other than that, there's all kinds of talent down the row. That's something to be excited about. I know they've done a nice job with trying to build up the catching depth. That's been a point of emphasis over the past few years, and the fruits of the labor are showing."

The Orioles' audition for a rotation candidate who could potentially slide into right-hander Chris Tillman's spot to open the season will continue into the final days of the Grapefruit League schedule. But the past two games provided some insight into two contenders who carry as many questions...

The Orioles' audition for a rotation candidate who could potentially slide into right-hander Chris Tillman's spot to open the season will continue into the final days of the Grapefruit League schedule. But the past two games provided some insight into two contenders who carry as many questions...

With free agent Welington Castillo, who signed a one-year deal to be the starter, away at the World Baseball Classic, the team's variety of talented backstops have been put in the shop window during Grapefruit League games.

Joseph has handled most of the work, but behind him are Chance Sisco, Francisco Pena and Audry Perez, all of whom could be ticketed for Triple-A Norfolk and thus one step from the majors. Austin Wynns joined camp recently, with Yermin Mercedes heading back to minor league camp in his place.

"We look at them all as potential everyday catchers," Showalter said. "Let's be frank. Some of them, the thing that really puts them into that limelight is if they're a good defensive catcher and an offensive threat. Those guys are really hard to find in today's game. You can count them on one hand.

"That's one of the things that's intriguing about Welington. But they come in all shapes and sizes. You attack their weaknesses and realize that maybe they're better than you think they are. I've been impressed with all of them."

They all show no two catchers are built alike, though there are challenges and checkpoints each has to go through to catch at the major league level. They use a deep bench of coaching wisdom and each other to pull themselves there.

When dealing with the human body, and all its various oddities and forms, one thing that's stressed is there's no point in creating cookie-cutter copies when it comes to catchers. They were paired at Norfolk all of last year, but there's no way what works for the 6-foot-2 Pena is the same as for the defensively advanced Perez, who is four inches shorter. Sisco stands as tall as Pena, but is listed 35 pounds lighter.

When it comes to bodies, minor league catching coordinator Don Werner said flexibility is key over anything else. The days of the squat, stocky catcher are gone, with leaner athletes now taking hold behind the plate.

Everyone in the Orioles' program acknowledges that the core values are the same, no matter your size — prioritize defense, provide your pitcher with a good target, present the pitch as a strike to the umpire, be everything your pitcher needs.

"But how you get to them is kind of your own personal flair," Joseph said. "So with that, not as much, but I don't even know if there's any two catchers that even catch alike. It's a bit like hitters. It's such an artsy position. You have a lot of self-expression in the way you frame the pitch, throwing the ball back to the pitcher. There's all kinds of different ways, body language that you give."

For someone who grew up catching, those things are acquired over time. For others, like Sisco, who began to work as a catcher in his senior year in high school, it's learning under the scrutiny that comes with professional baseball.

Checking all the boxes

Showalter can rattle off catchers who, just by seeing them in workouts, look like big leaguers to him. Wynns is one. Perez could do the job, too, and he's already seen Joseph and Pena show themselves as major league catchers.

But what keeps so many of them from reaching and sticking in the majors is the bat. For the rest, it's that they can't handle the position at the highest level despite a big league-ready bat.

The reason Joseph was stuck in the minors until he was 27 was because his glove, or at least the perception of it. But before that was ready, his bat was and the team tried him at first base and in the outfield to try to find an easier home for his bat at the next level.

Sisco is coming along well enough behind the plate that his bat, which scouts believe will be a true asset in the majors, won't push him away from the position. Joseph and Pena have both said they've seen improvement from him this offseason, as has Werner.

Werner views what he does when he pops into affiliates to work with the catchers as good for getting them to the cusp of the majors, and what bench coach John Russell does in spring training as finishing school.

Werner and Russell are catching resources that the crew in major league camp gush about. And Werner hopes the same thing that helped get Joseph beyond Bowie could help Sisco. Werner picked up what he called a "cheat" from Wieters that allowed for a quick transfer and throw, and it brought Joseph under the elusive two-second pop time mark that the team was looking for. If such tips take for Sisco, he could have what Werner believes is the final piece.

"I think the adjustments that they're making with his throwing, because he's just not blessed with a strong arm, I think it's really helping him right now," Werner said. "And that, to me, is the missing link to where he can go out there and control the running game.

"His receiving, I think, is just top notch. I think his blocking, he's one of our better blockers, and he's got a real good feel for the game. The last link here is getting his throwing together. I think he can be a lot like Caleb Joseph as far as his throwing, so it's great that he's hanging around with him and John Russell now in spring training."

Sisco gets all the attention as the organization's top prospect, but there's more than one man in the minors who the team could call on in a pinch. That they're so different means that while they compete for the same two roster spots, each knows a spot could be calling their name depending on what the team needs.

"We try to help each other," Pena said. "If you notice, not only on this team but any team, it's a brotherhood. Playing any position, but especially catcher, you have to have really good communication with each other because we command the game most of the time. We have to have a really good bond and try to help each other in what we can. Everybody's different. Everybody can bring something different to the game, and that's the nice thing about this game."