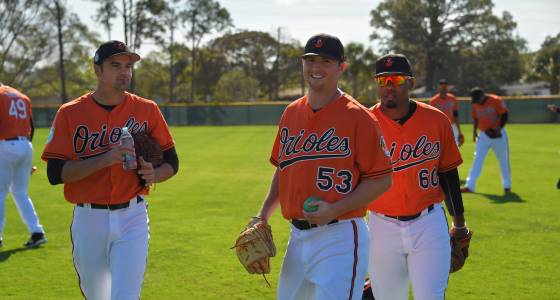 Left-hander T.J. McFarland, who was designated for assignment last Sunday, has cleared outright waivers and has been placed on release waivers, according to an industry source.

McFarland was designated for assignment when the Orioles acquired left-handed swingman Vidal Nuno in a trade with the Los Angeles Dodgers.

By passing McFarland through release waivers, the Orioles can rid themselves of paying him the $685,000 he was owed in his first year of arbitration eligibility.

The move doesn't necessarily end McFarland's tenure with the Orioles. If he clears, he could re-sign with the team as a minor league free agent. But the Orioles would be competing with 29 other teams for his services.

The Orioles traded for two left-handed pitchers with starting and reliever experience in the past week -- acquiring Nuno from the Dodgers and Richard Bleier from the New York Yankees -- and both are optionable, while McFarland is not. But McFarland, who mostly pitched in long relief for the Orioles, could still fit as a valuable depth piece.