The Detroit Tigers trotted out their front-line major league lineup Friday afternoon at newly renovated Publix Field at Joker Marchant Stadium, but the collection of part-time players, prospects and auditioning journeymen that opened the Grapefruit League... 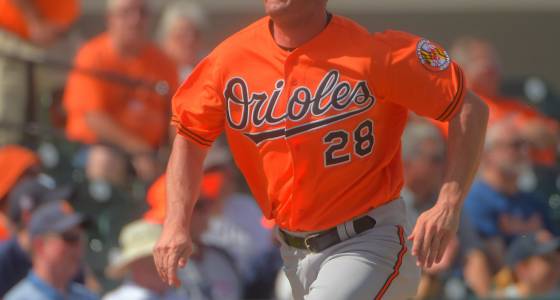 The Detroit Tigers trotted out their front-line major league lineup Friday afternoon at newly renovated Publix Field at Joker Marchant Stadium, but the collection of part-time players, prospects and auditioning journeymen that opened the Grapefruit League season for the Orioles apparently didn’t notice.

The big-swinging Tigers were quiet as kittens at the plate and the Orioles managed to scratch out a run here and there to score an unlikely 2-0 victory that featured a number of nice first impressions and unexpected debuts.

Starting pitcher Tyler Wilson got off to a terrific start, dispatching the six well-heeled Tigers hitters he faced and needed just 21 pitches to do it. Former Kansas City Royals and Los Angeles Angels infielder Johnny Giavotella opened his quest to win friends and influence future roster decisions with singles in each of his first three at-bats.

Outfielder Logan Schafer might not be around on Opening Day, but he will always be able to say that he scored the first run in the Tigers’ refurbished stadium and Ryan Flaherty can say he drove it in.

The game featured a couple of intriguing cameos. Preston Palmeiro, the son of former Orioles star Rafael Palmeiro, pinch ran in the eighth inning and finished the game at first base.  Later in the inning, 2015 first-round draft pick DJ Stewart made a pinch-hitting appearance and struck out looking.

Starting pitcher Tyler Wilson looked like he might be overmatched by the star-studded Detroit Tigers lineup in the Orioles’ Grapefruit League opener on Friday, but he delivered a surprisingly tight two-inning performance during which he threw just 21 pitches and the heart of the Detroit lineup...

Starting pitcher Tyler Wilson looked like he might be overmatched by the star-studded Detroit Tigers lineup in the Orioles’ Grapefruit League opener on Friday, but he delivered a surprisingly tight two-inning performance during which he threw just 21 pitches and the heart of the Detroit lineup...

The Tigers officially re-opened their upgraded spring training ballpark with a 20-minute pregame ceremony honoring late owner Mike Ilitch, who passed away on Feb. 10 at age 87.

The tribute included a video presentation on the huge new video scoreboard and the team unveiled the uniform patch the Tigers will wear throughout the 2017 season. The round patch bears Ilitch’s nickname -- Mr. I – against a simple white background with a dark blue border. The same image was painted on the grass in front of the Tigers dugout.

Ilitch, who founded the Little Caesars Pizza chain, had owned the team since 1992, when he bought it from Domino's Pizza chain owner Tom Monaghan. Ilitch also owned the NHL’s Detroit Red Wings.

Giavotella got the start at second base and made quite an account of himself in front of his new team. He singled in each of his three at-bats. It would take an unexpected sequence of events to land him on the Opening Day roster, but stranger things have happened. The impression he makes on manager Buck Showalter could determine whether he’s the first guy on the Norfolk shuttle if the Orioles need a fill-in player.

Orioles infield prospect Erick Salcedo made a couple of nice plays in the ninth inning of Friday’s game, which got a smile from Showalter and, no doubt, from Tigers first base coach and longtime defensive wizard Omar Vizquel.

“Salcedo was pretty impressive,” Showalter said. “It’s a big day for him. I wanted to run him out there. Vizquel has been helping him in the offseason. I know Omar got a kick out of some plays he made. It was good to see. It was a good defensive day for us.”