Outfielder Seth Smith saw improvement in his strained right hamstring — he tested his leg by running in the outfield and took batting practice before Friday night’s series opener against the Boston Red Sox — which is what the Orioles needed to see as... 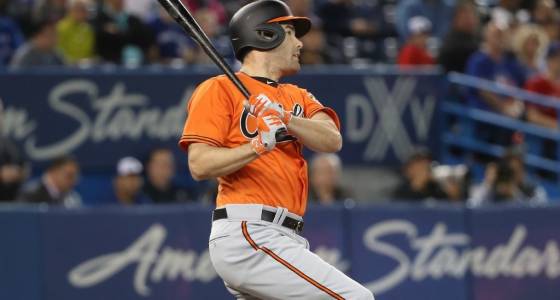 Outfielder Seth Smith saw improvement in his strained right hamstring — he tested his leg by running in the outfield and took batting practice before Friday night’s series opener against the Boston Red Sox — which is what the Orioles needed to see as they neared having to decide whether to place him on the 10-day disabled list.

“We’re hoping that today he takes a step forward,” manager Buck Showalter said. “We’ll see how that goes. He didn’t do a whole lot other than get treated [Thursday], so we’re hoping he moves around a little and feels pretty good.”

The club didn’t need the left-handed-hitting Smith to start Friday against Boston left-hander Drew Pomeranz, and the Orioles face another lefty Sunday in former Oriole Eduardo Rodriguez, but Smith’s inactivity is clogging a valuable roster spot.

Showalter said the team had even considered activating outfielder Joey Rickard from the disabled list just to come off the bench as a defensive replacement or pinch runner. Rickard, who is on the DL with a sprained left middle finger, is still in the process of doing light hitting drills.

“That’s a risky thing unless he has a really good day tomorrow, because say he hits in this progression while he’s active and then it blows up the next day because he’s done it too early and you lose all those days on the DL,” Showalter said of Rickard, who became eligible to return from the DL on Wednesday. “And we’re probably not going to do that at this point.”

Showalter said Rickard still has soreness in the finger, but the hope is he will proceed with his hitting progression. Rickard hit soft toss for the second straight day Friday and was scheduled to hit live batting practice for the first time Saturday.

“He’s still got a little soreness there that hasn’t quite gotten out,” Showalter said. “The hope and plan is to have him hit off coaches BP tomorrow. We just don’t want it to go backwards, so we’ll see.”

Smith left Tuesday night’s game in the sixth inning, replaced in left field by rookie Trey Mancini, after feeling discomfort in his hamstring in his third at-bat of the night, then feeling the muscle tighten on him while playing defense in the following half-inning.

The Orioles arrived home after their first road trip of the season – a taxing three-city, nine-game swing – atop the American League East with a majors-best 10-4 record as the division-rival Boston Red Sox come to Camden Yards for a three-game set.

After three interleague games in Cincinnati, the...

The Orioles arrived home after their first road trip of the season – a taxing three-city, nine-game swing – atop the American League East with a majors-best 10-4 record as the division-rival Boston Red Sox come to Camden Yards for a three-game set.

After three interleague games in Cincinnati, the...

Another problem with replacing Smith is that every position player on the organization’s 40-man roster is either already on the 25-man active roster or on the DL, meaning the club would have to drop someone from the 40-man roster to add another outfielder.

Left-hander Jayson Aquino said his brief stint in the majors last season should help him dodge any jitters in making his first major league start Saturday.

“I feel excited for this opportunity, not necessarily nervous,” Aquino said through interpreter Ramon Alarcon. “Last season, even though it was limited experience for me, but I felt confident then, and now this year I feel even more confident.”

Aquino made just three appearances for the Orioles last season totaling 2 1/3 innings. His experience — all three games game in Orioles losses with the team behind late — won’t compare to his first big league start, but Aquino performed well, allowing just one hit in three scoreless outings while striking out three and walking none.

This spring, Aquino took a huge step forward, compiling a 1.29 ERA and allowing just two runs over 15 Grapefruit League innings, but was sent to Triple-A Norfolk to open the season. The Orioles then selected right-hander Alec Asher from Norfolk to start last Saturday in Toronto against a heavily right-handed lineup. But against a Boston team with its share of left-handed hitters, Aquino seemed to be a better fit.

Asher — who pitched 6 1/3 innings of one-run ball against Toronto on Saturday — will work out of the bullpen for now. Showalter likes that he’s had experience as a reliever, but he said Asher and Aquino will continue to be candidates for future starts on a case-by-case basis.

“Aquino basically won the job in the spring and he’s coming off a good outing. It’s his time. It’s his turn, and we’ll see where we are after that.”

Aquino, who was recalled Wednesday, was told by Showalter on Thursday that he would start Saturday.

“The manager told me [Thursday] and told me about this great opportunity,” Aquino said. “This is something I’m really looking forward to, just to demonstrate my abilities and my talents and what I can do out there.”

The Orioles proceeded with a precautionary MRI on closer Zach Britton’s elbow and forearm area — the team was still awaiting results of the tests before Friday’s game — but Showalter said Britton told him he’s ready to resume throwing.

“He feels good,” Showalter said. ‘He was ready to pitch, like yesterday in the dugout, he said, ‘I’m ready to throw.’ … He was champing at the bit yesterday. He said, ‘I feel good. I’m ready to go.’ ”

Showalter said performing the MRI nearly a week after Britton felt discomfort in his forearm after throwing a breaking ball in his last outing Saturday was always in the works once the team returned from its road trip.

Asked whether he believed Britton’s late start to spring training and shortened workload contributed to the injury, Showalter didn’t rule it out. Because he was held out with a mild oblique strain, Britton didn’t make his first Grapefruit League appearance until March 14 and pitched just 5 1/3 innings.

“It’d be easy for me to say absolutely not,” Showalter said. “Everything is related to everything. It has nothing to do with his velocity or his movement. I can tell you that. It might have had something to do with his command a little bit. It’s like the old question about the WBC and this and that. Does this lend to that? Yeah, everything has a point-counterpoint, but Zach’s not talking about it too much.

Fast-tracked Double-A Bowie outfielder Cedric Mullins strained his left hamstring in Thursday’s game running out a double-play ball. Mullins was off to a hot start, hitting .367/.406/.683 with 10 extra-base hits (five doubles, one triple and four home runs) in 14 games for the Baysox. … Outfielder-turned-pitcher Dariel Alvarez had Tommy John elbow reconstruction performed by world-renowned orthopedist Dr. James Andrews. Alvarez began transitioning to pitching after the was optioned during spring training, but soon after was injured. The team dropped him from the 40-man roster and released him, but later re-signed him to a minor league deal.