Orioles right-hander Joe Gunkel won’t pitch in today’s Grapefruit League home opener at Ed Smith Stadium as scheduled because of an upper respiratory infection, manager Buck Showalter said.Gunkel, who was added to the 40-man roster this offseason, was... 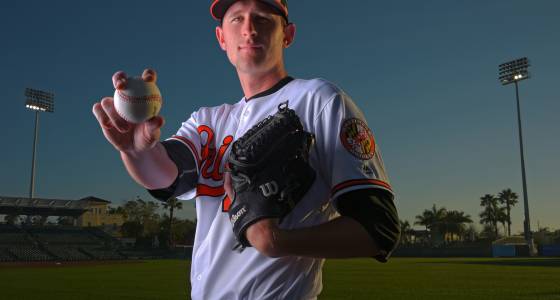 Gunkel, who was added to the 40-man roster this offseason, was scheduled to make his first Grapefruit League appearance against the Pittsburgh Pirates on Sunday.

“He could probably pitch today but he’s not feeling well,”  Showalter said. “He’s better than he was yesterday but [pitching coach] Roger [McDowell] and I decided just to be fair to him [to] let him get back to 100 percent before we run him out there, especially his first time out there.”

Gunkel’s unavailability will allow Showalter to get a look at one of the pitchers added from minor league camp.

Showalter said closer Zach Britton continues to get better from soreness in his left side. He threw off flat ground in today’s workout and Showalter said he should get on a mound soon. Showalter said it is still unclear when Britton will pitch in a spring game.

“We’re not there yet, but I would think early March,” Showalter said. “Depends on how you define early March. Before the 15th?

Right-hander Logan Ondrusek (right ankle sprain) threw off a half mound Sunday. His next step would be throwing off a full mound.

The Orioles still expect infielder Paul Janish to be in the field on Monday. He was slated to finalize his physical on Sunday.

David Washington, who has been out after injuring his shoulder in the team’s first intrasquad game on Tuesday, could be available to today’s game.

Several minor leaguers – including Ryan Mountcastle, Austin Hays, D.J. Stewart and Stuart Levy – came over from minor league camp to act as base runners in pregame rundown drills on the main field.