Orioles left-hander Wade Miley is one of the quickest workers in baseball, which can amplify the effect of how well he's actually pitching.When he’s getting ahead of hitters and throwing strikes, it’s a weapon to dictate the pace of a game by getting... 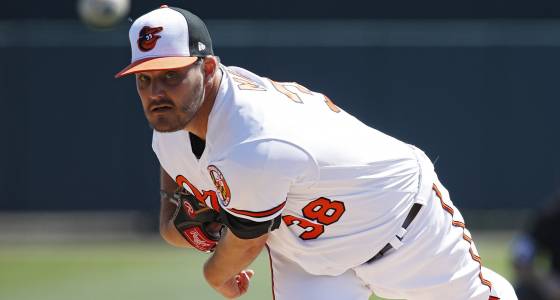 Orioles left-hander Wade Miley is one of the quickest workers in baseball, which can amplify the effect of how well he's actually pitching.

When he’s getting ahead of hitters and throwing strikes, it’s a weapon to dictate the pace of a game by getting his team back in the dugout quickly. When Miley is struggling, it can put him on the fast track to trouble.

He’s never been a pitcher who wastes time. Last season, his 17.8 seconds between pitches was the fastest in baseball, according to FanGraphs, and over the past five years Miley ranks third in the majors in shortest time between pitches (18.4 seconds).

Just like pitchers use spring training to find their comfort zone on the mound, one of Miley’s top priorities in spring is finding the right tempo.

“You know what,” Miley said following his first Grapefruit League outing in the Orioles’ spring home opener against the Pittsburgh Pirates at Ed Smith Stadium, “I just work fast. I don’t go out there and try to do that. It’s just how I am. Obviously, at times, I need to slow myself down, and that more what I work on in spring training is not getting too fast and being able to just pump the breaks a little bit and get back in a good rhythm.”

Miley’s two innings Sunday went by in a flash, a positive sign for his first spring training start. He attacked hitters, worked ahead with a fastball that sat at 91-92 mph and he made quick outs.

Of his 27 pitches, 19 were strikes, including eight of the nine pitches to begin at-bats. He threw more than three pitches to just one batter.

“I thought it was pretty good,” Miley said. “Just trying to knock some dust off. First time I’ve seen hitters. Overall, I thought it went pretty well. I was able to mix in every pitch at some point. It was good.”

Miley allowed three base runners, all coming with two outs. Andrew McCutchen doubled off the right-field wall in the first, Eric Wood hit a solo homer to left in the second, and Miley hit the next batter on an 0-2 count.

“I thought it was coming out pretty good. Left a few balls up, but overall, it was good to get that one out of the way. …  Just [concentrating on] quality of pitches and commanding the baseball, so that’s what I’m looking for right now, being able to move the ball in and out, up and down and just make quality pitches.”

Miley, who struggled in his first six weeks with the Orioles following his trade to Baltimore at last year’s trade deadline, hopes to build on a strong finish to the season that saw him post a 1.93 ERA and hold batters to a .239 average in his final three outings of the season. That turnaround came after Miley posted a 8.41 ERA in his first eight starts with the Orioles.

“That’s what I’m hoping for,” Miley said on carrying over his strong finish last year. “I finished strong last year, and I’m looking to just kind of jump-start from where I left off. I had good command those last couple starts and I was able to get the ball in on righties pretty well toward the end of the year. I think that was a big help.”

If Miley is able to do that, he’ll provide stability to the back end of an Orioles starting rotation that has experience but was shaky last season. He’s in his first spring training with the Orioles, but said he’s benefiting from already making the adjustment to a new clubhouse late last season.

“It was very good that I was over here for the last two months and already knew the guys coming in,” Miley said. “Just [feel] a lot more comfortable coming in and get about your business.”