An Orange County sheriff’s deputy was shot in Holden Heights on Tuesday while trying to serve a warrant on a convicted felon.Sgt. Richard Stelter, 45, was shot "multiple" times, Orange County Sheriff Jerry Demings said at a news conference at... 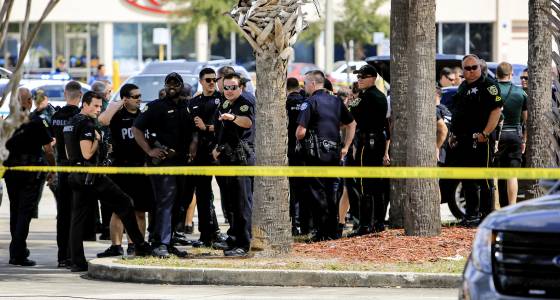 An Orange County sheriff’s deputy was shot in Holden Heights on Tuesday while trying to serve a warrant on a convicted felon.

“He is able to communicate; he’s in relatively good spirits,” Demings said.

Deputies who were with Stelter shot an killed the man accused of shooting him, 20-year-old Christopher Redding Jr., Demings said.

Redding was tried and convicted of attempted murder when he was 17, Demings said. He was recently released from prison.

“Today, those violent tendencies led to his death,” Demings said.

Stelter was one of four deputies in an investigative surveillance squad who were trying to serve a warrant on Redding an alleged violation of probation and several robberies of elderly women who were injured.

A young woman was in the car with Redding at Park Central apartments, near John Young Parkway and Americana Boulevard, when the shooting started. She may have received a minor wound, Demings said.

“In the shooting today, we are not looking for additional suspects,” Demings said.

A woman who said she was a friend of Redding’s family was standing outside the apartment complex, crying. She was trying to find a way into the complex to help her friends. She said she did not want to be identified because of the sensitive situation.

The warrant on Redding was for a series of three robberies -- two in Orange County and one in Orlando -- during which the elderly women were injured when four suspects snatched their purses.

One of the victims needed a shoulder replacement; another required shoulder surgery. The attacks happened at the Mall at Millenia, Florida Mall and on Apopka-Vineland Road.

Stelter's wife is with him at the hospital. The couple have three children, ages 25, 20 and 14.

Orange County deputies gathered outside the emergency room entrance at Orlando Regional Medical Center on Tuesday as employees put up large blue tarps to conceal people coming in and out of the hospital. They stood by, keeping watch and calmly talking to one another.

The Orlando Police Department tweeted that it is “standing with our brothers and sisters” at the Sheriff’s Office and “praying for the deputy’s speedy recovery.”

This shooting comes just days after two Casselberry Police Department officers were injured in a shooting following a domestic-violence call.

And last month, Orlando Police Lt. Debra Clayton was fatally shot at a Wal-Mart at Princeton Street and John Young Parkway. After a days-long manhunt, Markeith Loyd was arrested and charged in her death.

This is a breaking news story. Check back for updates.

Gal Tziperman Lotan and David Harris contributed to this report. sallen@orlandosentinel.com or 407-420-5417

An Orange County deputy was shot at the Park Central apartment complex on Americana Boulevard on Feb. 28, 2017.