Whoa! What happened at the Oscars Sunday night?Things got a little nutty at the 89th Academy Awards in the Dolby Theater when Warren Beatty and Faye Dunaway announced the wrong Best Picture -- "La La Land," but it was really "Moonlight."The whole atmosphere... 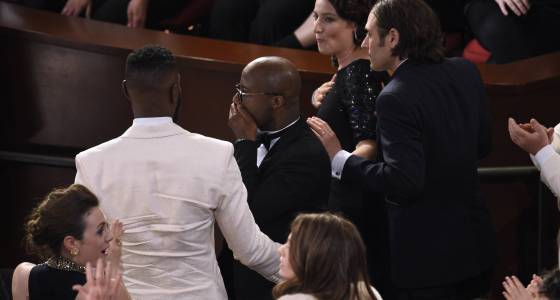 Whoa! What happened at the Oscars Sunday night?

Things got a little nutty at the 89th Academy Awards in the Dolby Theater when Warren Beatty and Faye Dunaway announced the wrong Best Picture -- "La La Land," but it was really "Moonlight."

The whole atmosphere of the Oscars, usually accused of being stuffy, stiff and highly controlled, was otherwise kicked back like a Jimmy Buffett song.

Packets of candy, cookies and doughnuts parachuted into the audience. Three times.

Host Jimmy Kimmel brought a busload of unsuspecting Hollywood tourists into the Dolby Theater. They thought they were going to see a costume museum.

Kimmel also hoisted the young star of "Lion," Indian actor Sunny Parwar, above his head to the tune of "The Lion King."

Then came the "Mean tweets" segment in which stars read insulting tweets written about them.

"La La Land," the odds-on favorite with 14 record-tying nominations, earned only six Oscars, but they were the biggies: Director, Actress, Score, Song ("City of Stars"), Production Design and Cinematography.

As expected, Casey Affleck won Best Actor for his role as a grieving father in "Manchester by the Sea," which also won the Original Screenplay Oscar.

"Man, I wish I had something bigger and more meaningful to say," Affleck said after praising his co-workers and the other Actor nominees,

Emma Stone won Best Actress for her role as an actress in "La La land." She called her co-star, Oscar nominee Ryan Gosling, "the greatest partner in this crazy adventure," and promised to "hug the hell" out of co-workers, "when the feeling returns to my body."

Justin Timberlake set the party tone from the start with his rocking opening number "Can't Stop the Feeling" from the animated film "Trolls," delivered as the singer passed through the theater, whipping the crowd into a festival mood.

Supporting Actress winner and "Fences" star Viola Davis cut loose with such an explosively emotional burst of gratitude that not even the Academy's timekeeping police dared interrupt her.

"Exhume those stories of the people who dreamed and never had those dreams come to fruition," she quietly thundered, "and the people who loved and lost. I became an artist and thank God I did."

Davis left the stage ablaze and audience members wiping tears from their eyes.

"She just been nominated for an Emmy for that speech!" Kimmel quipped.

Mahershala Ali, accepting his first Oscar from his first Oscar nomination, called working on "Moonlight" a "wonderful experience." He thanked his teachers and fellow filmmakers. He also gave a shout-out to his wife, who gave birth to their first child just four days earlier. One of the many standing ovations went to 98-year-old Katherine Johnson, the former NASA mathematician who inspired the story for the film "Hidden Figures." She said only three words, "I thank you," and audience members were dabbing their eyes.

About two hours into the awards, Kimmel announced "The show's half over and Donald Trump hasn't mentioned us once in a tweet. I'm beginning to worry."

Kimmel used President Trump as a comic foil a few times, but his chief target of the night was actor and producer Matt Damon, who the host mercilessly goaded and baited.

"He has no discernible talent," Kimmel said of Damon, "but he works."

Late in the show when Damon paired with Ben Affleck to present the Original Screenplay Oscar, the orchestra swelled to play the actor offstage. Just him. Not Affleck.

Asghar Farhadi, director of Iran's "A Salesman," who also won for his "A Separation," had said he wouldn't attend the Oscars because of President Donald Trump's travel band to seven predominantly Muslim nations.

"I'm sorry I'm not with you tonight," he wrote in a note. "My absence is out of respect for the people of my country and those of other six nations who have been disrespected by the inhumane law that bans entry of immigrants to the U.S." He also wrote that movies "create empathy between us and others, an empathy that we need more today than ever."