It was about this time last year that Hyun Soo Kim took the field with his new American teammates for the first time, ready to show why he was one of the most popular players in South Korea and prove himself in the major leagues.It didn't go very well. Well,... 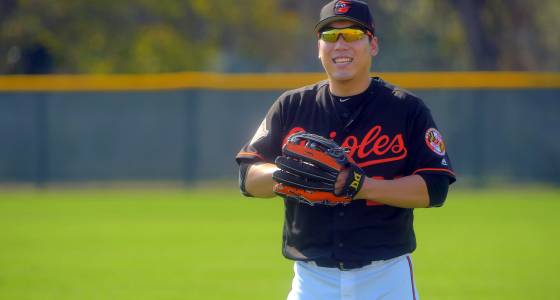 It was about this time last year that Hyun Soo Kim took the field with his new American teammates for the first time, ready to show why he was one of the most popular players in South Korea and prove himself in the major leagues.

It didn't go very well. Well, not at the beginning.

Kim's first spring with the Orioles, of course, was a nightmare. He went hitless in his first 23 at-bats of the 2016 exhibition season and looked all but helpless at the plate, leaving the Orioles to beg him to accept a minor league assignment.

He refused and this sad drama reached its lowest moment when Kim was booed running down the orange carpet on Opening Day.

You know the rest. He scratched out an infield hit to end the spring slump and woke up in the batter's box during the regular season to bat .302 and lead the team with a .382 on-base percentage.

So, would it surprise you to know that Kim now regards his horrible spring as a good thing?

"That definitely made me a better player, more mature as a player," he said through interpreter Derrick Chung. "It was a good time for me to learn about myself and how to get myself better."

It certainly didn't look like a lot of fun, being the stranger in a strange land and not looking very much like you belonged there. His teammates watched and sympathized — all of them know what it's like to be in a slump that seems like it will never end — but there wasn't a lot they could do about it.

"Of course, I mean everyone knew he was significantly better than that," said Mark Trumbo, who was also new in camp last spring. "Sometimes, especially with the language barrier, there's not anything you're going to say that's going to bring that much peace of mind. It really just takes some success to build that confidence back."

Still, Kim credits his teammates for helping him to get comfortable in his new uniform, new league and new country.

"My teammates helped me get used to the surroundings, just getting used to the clubhouse and all that," he said. "This year, I definitely feel a lot more comfortable than last year at this point."

He remembers how he felt at the start of the exhibition season, right before his spring started to unravel. He said he was tight, nervous. Who wouldn't be in that situation? But that wasn't the reason he got off to such a slow start. It was more about adjusting to a 95 mph fastball league, which obviously took a while.

"I know I personally was [feeling for him]," reliever Brad Brach said. "First of all, coming over having to deal with the language barrier and having to deal with the cultural barrier. And then to go out there and he's supposed to be a guy who's going to help us, and he goes 0-for-10 and then 0-for-20 and you want him to get a hit so bad.

"I remember when he got his first one and I happened to be in the dugout when he got it and the smile on his face was just like, you could tell the burden was just taken off."

Not totally. There was still that not-so-magic moment during pregame introductions on Opening Day at Oriole Park.

"I just felt bad last year when that section booed him when he came down the orange carpet," Brach said. "He was trying so hard that I think it was affecting his ability on the field. I'm just glad he was able to get a chance to prove that he obviously can play at the major league level."

Kim scratched out two soft hits in his first start of the regular season, ended up going 9-for-15 in six April games and never really looked back. His average never dropped below .300 and his on-base percentage started with a four for most of the season.

"Eventually, given enough reps everyone is going to show who they are, and he's a perfect example of that," Trumbo said. "We acquired him. He had that skill set. It took a little while to acclimate, but he played excellent for us last year."

Kim didn't waste any time changing the narrative this spring. He got hits in each of the Orioles' two intrasquad games.

"You can see how much more comfortable he is this year," manager Buck Showalter said. "There were a lot of things that were new things for him last year. He knows what's expected.

"It's an important year for him in his mind. You could tell. He got down here earlier this year to simulate more of a Korean spring training as opposed to an American spring training. He's got another level he's capable of going to."

There are new challenges this spring. Showalter hopes to get Kim more acclimated to left-handed pitching, so the Orioles can squeeze even more on-base potential out of him. Kim welcomes the opportunity to play more than the 95 games he appeared in last year and doesn't question his ability to earn that additional playing time.

He said this week that he has enjoyed living in the United States and never — not even during the most trying moments of that trying spring — did he ever regret coming to America.

"No, I never had that thought," he said. "I just wanted to come here and learn."

Read more from columnist Peter Schmuck on his blog, "The Schmuck Stops Here," at baltimoresun.com/schmuckblog.