Famagusta 14°
overcast clouds
BUSINESS EDUCATION ENTERTAINMENT HEALTH POLITICS SCIENCE SPORTS TECHNOLOGY
10:22 Four Benefits of Hiring a Dedicated Development Team
04:48 Mark Kelly, President of Safety Marking Inc., Discusses Structuring Effective...
17:58 Trump wants to play golf at the Biden swearing-in in Scotland - but is...
17:54 First doubts Regarding tightened Steps: two National Countries Extract...
10:39 Covid-19 : in France, the end of containment and entry into force of the...
04:34 The schools of Rome will use the Internet with light bulbs: what it is...
10:58 Kratom Tea: How Is It?
11:46 Office Furniture Products for you!
12:17 Top Clubs, Their Value, Revenue And Current Standings
11:14 Reasons Why Rewarding Yourself is a Good Practice
BIST
1536
GOLD
438.234
USD
7.3521
GPB
10.1207
EUR
8.9384
Breaking News
Navigating a Hearing Disorder Diagnosis
Close

One Orioles legend celebrates another with Cal Ripken, Brooks Robinson at Aspire Gala

Brooks. Cal. Surnames are superfluous for the two Hall of Famers who, together, led the Orioles for parts of six decades.Friday night, Brooks Robinson and Cal Ripken Jr. shared the stage at the 13th annual Aspire Gala at the Waterfront Marriott. There, 780... 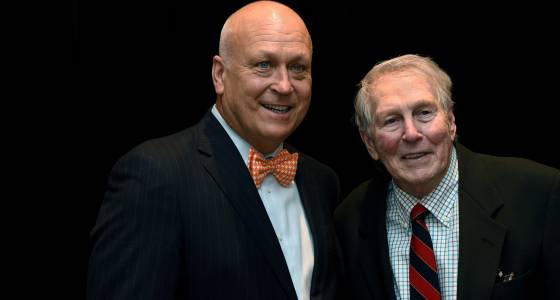 Brooks. Cal. Surnames are superfluous for the two Hall of Famers who, together, led the Orioles for parts of six decades.

Friday night, Brooks Robinson and Cal Ripken Jr. shared the stage at the 13th annual Aspire Gala at the Waterfront Marriott. There, 780 guests who paid $1,000 apiece stood in an interminable serpentine line to shake hands and swap banter with The Human Vacuum Cleaner and The Iron Man. Some ladies offered hugs and kisses. For Annabelle Rossow, of Minnesota, a moment with the Orioles icons marked the perfect end to her 13th birthday.

Proceeds benefited the Cal Ripken Sr. Foundation, which, this year, honored Robinson, 79, for his athletic excellence and community service.

"Dad would be proud [of the choice]," Ripken said. "Brooksie is the ultimate professional, a model teammate and a model person."

Ripken Sr. "was a wonderful guy, a baseball man through and through," Robinson said. "I could say, 'Cal, I need some extra hitting practice,' and he'd say, 'What time do you need me?' He'd do it at 10 in the morning or 10 at night. He was always there to help you with the basics; that's where 'The Oriole Way' came from.

"I compare him to Paul Richards [Orioles manager from 1955-61] who was the best I ever had. Both knew every position and what made it tick. It's too bad that Cal only got to manage the Orioles when they weren't a very stable organization and not doing well."

"Brooksie is such a humble and busy guy, but we finally wore him down and got him to say 'yes,' " Ripken said. "He has such a presence, and he has touched most everyone in the area. I've never heard anyone say a bad word about him.

"He was my childhood hero; I tried to be Brooksie at third base. When Dad took me to the ballpark and I got a chance to be around [Robinson], I got real quiet watching him.

"As a kid, I remember being glued to the TV and seeing him make those plays against Cincinnati in the 1970 World Series. He was an exciting player to attach yourself to. But my parents pointed him out to me not only because he was a great athlete, but for who he was as a man."

As a pro, Ripken said, "When I got moved to third base in Class A ball, I tried to copy Brooksie and how he made bare-handed pickups of bunts. Did I ever measure up to him at third? Probably not. But making difficult plays made me feel like I could relate to him."

For his part, Robinson recalled seeing a young Cal Jr. tag along with his father and "shag balls in the outfield" at Memorial Stadium.

"His love for the game was just like mine," Robinson said. "I never wanted to do anything else in life. Like Cal, a lot of that came from my father. He played second base for the International Harvester fast-pitch softball team in Arkansas which went to the world championships in Soldier Field in Chicago the year I was born [1937]."

Robinson has long embraced the Ripkens' cause. In November, he attended the groundbreaking ceremony for Eddie Murray Field at BGE Park in West Baltimore, a youth development park named for the Orioles Hall of Fame first baseman and sponsored by the Ripken Foundation. A month later, Robinson attended a fundraiser for the organization in Washington, despite a recent mishap.

"He had lost his balance, falling going down a hill and hit his face on a rock," Ripken recalled. "He was pretty bruised, but [at the event] he insisted on letting folks take his picture. Brooks could have just sat there, but he wanted to be personable, stand and greet everyone, even though his face was black and blue."

"His attitude reminds me of my dad," he said. "I'm still in awe of Brooks."