One less hole to stumble into at Danforth and Greenwood: The Fixer | Toronto Star

It’s amazing what a friendly nudge from the city can do to get a utility moving in the right direction.On Jan. 24, we reported on a large hole that was dug between the curb and sidewalk at the northwest corner of Danforth and Greenwood Aves., which... 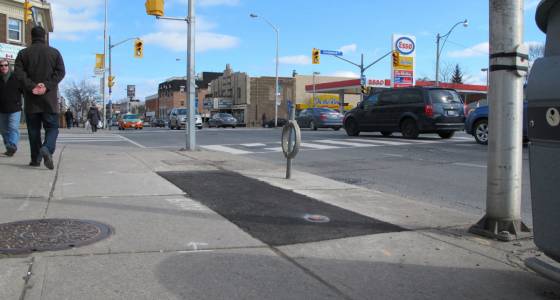 It’s amazing what a friendly nudge from the city can do to get a utility moving in the right direction.

On Jan. 24, we reported on a large hole that was dug between the curb and sidewalk at the northwest corner of Danforth and Greenwood Aves., which was covered with plywood and surrounded by plastic fencing.

The excavation remained unfilled for several months, while the plywood covering the hole became soft and spongy and the plastic fencing around it was trampled down.

The fenced-in area also became a holding pen for wind-blown street trash, prompting a complaint from a reader who said she couldn’t understand why it was ignored for so long by the utility responsible.

Within a couple days of our column we got a note from transportation services, saying Bell Canada was responsible for digging the hole, which was promptly filled with asphalt when they were reminded of it.

Our Jan. 21 column was about a parking regulation sign on Gough Ave., in parking-starved Greektown, that was turned away from the street so that it couldn’t be seen by drivers looking for parking.

The sign said parking on Gough was only for residential permit holders, even during the day. But because it was turned away from the street, hapless motorists were stumbling into what amounted to a ticket trap.

Allen Pinkerton, in charge of city street signage, said he’d make sure the sign was adjusted. Paul Epton, who first told us about it, emailed to confirm it had been moved, adding, “Thank you on behalf of all future unsuspecting parkers.”

Last June 28, we reported on one of the dumber things we’ve seen in our fixer travels, a utility pole located smack dab in the middle of a driveway serving two businesses on Major Mackenzie Dr. in Vaughan.

Drivers pulling in from the street had to circumvent the pole, which was also leaning badly. Dr. Avram Sussman, whose practice shares the driveway, had been trying for years to get it moved.

Sussman sent us a note recently, saying, “I am pleased to report that Power Stream removed the pole from the middle of the driveway on Dec. 10 and replaced it with a new pole, stationed one metre west of the driveway.”