Once Upon A City: Rochdale College and the hippie dream | Toronto Star

The larger-than-life bronze statue of the Unknown Student sitting head bowed outside 341 Bloor St. W. represents the idealistic dream of free expression that was Rochdale College. Designed in 1969 by Derek Heinzerling, a Rochdale resident and American... 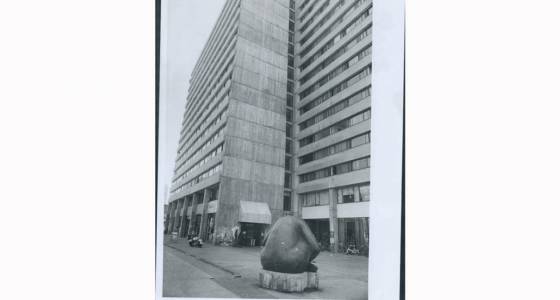 The larger-than-life bronze statue of the Unknown Student sitting head bowed outside 341 Bloor St. W. represents the idealistic dream of free expression that was Rochdale College.

Designed in 1969 by Derek Heinzerling, a Rochdale resident and American draft dodger, it once faced the highrise co-op, as if contemplating this experiment in education.

Rochdale College was incorporated in 1964 as a solution to a student housing problem at the University of Toronto. It became an ambitious experiment in education and community living when Campus Co-op, the self-funded, student led housing co-operative, hired Howard Adelman, who later discovered that the $175,000 annual property tax could be avoided if the building had a functioning educational system. Both male and female students, primarily from U of T, were offered free tuition and dirt cheap rent.

The concept was far out of the education norm.

Academics, including poet Dennis Lee, who would go on to write the children’s book Alligator Pie, as well as others with non-academic backgrounds, replaced professors. Instead, they became “resource people” who led informal discussion groups.

The award-winning Lee, who became an officer of the Order of Canada in 1993, was one of the founders of Rochdale and the main leader of the student-run experiment. The late activist and politician Dan Heap also lived at Rochdale, as did science fiction and fantasy author the late Judith Merril, who founded Rochdale’s library.

The goal was free expression, far from the constraints of traditional classrooms and structured societies.

The students — about 20 per cent of them U.S. citizens, including a high percentage of draft dodgers — were to pick their own subjects to study and work independently on projects with little supervision. Its location at Bloor St. W. at Huron St., near the University of Toronto and Yorkville — where notable musicians such as Joni Mitchell, Neil Young and Gordon Lightfoot had launched their careers — fit nicely into the pocket of political idealism and experimentation of the late 1960s.

But the hedonistic students found themselves in a purple haze of idealism that eventually went up in smoke. A combination of political pressure, lack of consensus in the leadership, some questionable tenants, and finally defaulting on its mortgage led to its demise.

Rochdale was named after the English town where the world’s first co-operative society was established in 1844. This 18-storey, $5,700,000 project was designed by architects Tampold and Wells for communal living.

Areas were divided into units of roughly a dozen bedrooms (called ashrams) and every ashram had a communal washroom, kitchen and dining room and was independently operated so each unit was responsible for collecting rent and its own housekeeping. Other areas housed bachelor, one-bedroom and two-bedroom apartments. The first and second floors consisted of common areas reserved for social activities, education and commercial needs. The roof top was used for clothing-optional sunbathing and was where tenants would chill out listening to Rochdale’s pirate radio station CRUD.

“The philosophy of freedom and collective responsibility will form the backbone of Rochdale College. Students will live and study without the usual formalities of classes and grades,” explained a Toronto Star article on Feb. 6, 1968.

The article said each student would be able to work on a project or a subject of his choice and would do so independently.

“He will participate in seminar discussions with other students and will teach other students in his own field. There will be some instructors to deal with small groups or individuals.”

But a six-month construction strike in 1967 lead to delays and many anticipated student renters found accommodation elsewhere. So as the highrise’s floors went up, Campus Co-op made the building available to anyone. Many of these tenants weren’t interested in experimental education.

This open-door policy would mark the beginning of the end for Rochdale, as the co-op eventually turned into a haven for drug dealers, biker gangs and squatters.

Rochdale was a college that never issued actual degrees. In a tongue-in-cheek attempt at humour, “non-degrees” were awarded. A nondegree bachelor of arts was available for $25 and answering a skill testing question; a non-masters degree could be yours for $50 and a question you made up yourself; and a non-Ph.D cost $100, with no question required.

Over the seven years the college was open, it housed 5,000 individuals (including families), a daycare, as well as an art gallery, photo lab and studios for such pursuits as ceramics and woodworking. A cafeteria was open to the public.

It was also the scene of overdoses, police raids, at least one slaying and about six suicides.

In December 1971, Marika Sokoloski, 23, a former model and mother of a 4-year-old girl, was found stabbed to death in her third-floor apartment in Rochdale. Danny Provencher, 20, of Spadina Ave., was convicted of manslaughter and sentenced to 10 years in jail.

Theatre Passe Muraille, started by Jim Garrard, who was artistic director from 1968 to 1969, was born out of Rochdale as was the House of Anansi Press, which was founded by writers Dennis Lee and David Godfrey and has published such Canadian literary giants at Margaret Atwood, Northrop Frye and Michael Ondaatje.

Other creative seeds planted at Rochdale included This Magazine is About Schools, now This magazine, which promotes “progressive politics, ideas and culture” and The Spaced Out Library, the science fiction and fantasy book collection of author Judith Merril. Merril was the go-to resource person at Rochdale for publishing and writing. She donated her collection of 5,000 items to the Toronto Public Library in 1970. It’s now the Merril Collection of Science Fiction, Speculation and Fantasy and holds about 57,000 items.

The Hassle Free Clinic at 66 Gerard St. E. was a spinoff of the Rochdale Free Clinic, which provided medical aid to inhabitants.

And even Coach House Press, now Coach House Books, has a loose connection to Rochdale. Stan Bevington, founder of the Canadian literature publishing house was asked to be the resident printer/publisher at Rochdale but he set up his own shop instead.

Rochdale College became a self-contained community where tenants could find everything they needed within its walls.

“I’ve talked to people who would go weeks at a time, months even, without going outside, because everything was in the building,” pop-culture historian Stuart Henderson, who was researching a chronicle of Rochdale College, told the Globe and Mail on Nov. 8, 2013. “And we’re talking from child care all the way to maternity doctors. People would give birth at Rochdale.”

Nicki Morrison, who lived in Rochdale on-and-off, had the first baby born there. She founded the building’s Acorn Childcare Co-operative in room 626 in fall 1971, according to the Globe. It continued in the nearby St. Thomas’s Anglican church at 383 Huron St. It’s now known as the Huron Playschool Cooperative.

But as a social experiment, Rochdale didn’t have a chance to grow into its potential. Compounding problems was the gentrification of Yorkville. As police drove the squatters, bikers, drug dealers and flower children out, they moved west and into the experimental commune.

By 1971, Rochdale had evolved into what the CBC archives called“‘North America’s largest drug distribution warehouse.’ Hash, pot, and LSD are in large supply. The Rochdale security force includes members of biker gangs.”

It came to a head when, under a court order that gave the Central Mortgage and Housing Corporation title to the building, Sheriff’s officers turned up on May 30, 1975, with sledgehammers, banging on doors, breaking some down and serving eviction notices.

The last 60 tenants were evicted, The Star reported that day.

“Evicted tenants milled in front of the building shouting obscenities. Many women carried babies and were surrounded by their possessions, including many cats and dogs,” the Star reported.

Given all the negative press, the positive aspects of alternative education and the encouragement of free expression were often overlooked.

“People never knew about the education side of Rochdale because the papers didn’t find that dramatic or sensational enough to print,” Jim Washington, who lived there for three years, told the Star on June 7, 1975. “But the creativity really came together there. It was a good atmosphere.”

While there, Washington designed a wheelchair that could mount curbs and steps. “I got a Rochdale degree in revolutionary engineering,” said Washington, who arrived from Chicago to study at Rochdale. “It is the only degree I care to have.”

The Rochdale building was repurposed in 1979 as a Toronto Community Housing project known as the Senator David A. Croll apartments. Today it provides subsidized housing to seniors. The statue now faces the street — as though turning its back on this chapter in Toronto’s history.