On your mark, get set, go! The LA Marathon is on

And they’re off! As dawn turned into day, a massive sea of runners began crossing the starting line of the Los Angeles Marathon at iconic Dodger Stadium amid cheers and shrieks shortly before 7 a.m. Sunday.The 2017 Skechers Performance L.A. Marathon... 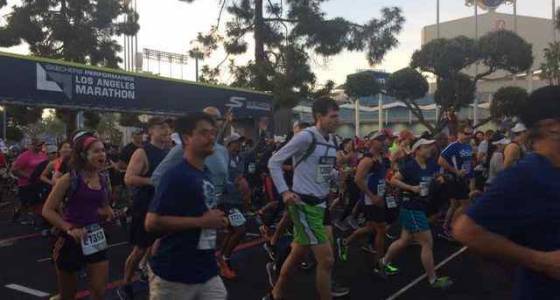 And they’re off! As dawn turned into day, a massive sea of runners began crossing the starting line of the Los Angeles Marathon at iconic Dodger Stadium amid cheers and shrieks shortly before 7 a.m. Sunday.

The 2017 Skechers Performance L.A. Marathon kicked off with wheelchair competitors around the crack of dawn, followed by handcyclists, elite women, elite men and the rest of the field — some 25,000 participants in all.

Among them was Sonia Seger, 43, of Santa Clarita who decided “at the last minute” to run the marathon in memory of her father, Roberto Cruz, who passed away unexpectedly three weeks ago.

“I wasn’t going to do it this year, but he was always so proud when I would do it,” said Seger, who also ran the marathon last year. “I haven’t even trained for it, but here I am.”

Seger, the youngest of four siblings, called her father, who was originally from Tijuana, “her No. 1 supporter” and best friend.

“I shared stuff with him that he literally took to his grave,” she said shortly before the race. “When I divorced, he moved in with me and helped me raise my children.”

The mother of four acknowledged she was feeling somewhat nervous because of her lack of training this year. But she took comfort in one thought.

“I know I’m going to be okay because he’s with me,” she said of her father, her voice cracking with emotion.

Also at the starting line was Ron Smith, 53, who brought his son Will, 19, from Iowa to participate in the LA Marathon.

It was Ron Smith’s fourth marathon — but his first in LA — and his son’s first.

“We’ve talked about (running together) for years and I’m getting older so I said ‘we gotta go get it done now or never,’” Smith said.

Will Smith, a sophomore at the University of Iowa, said before the race that he didn’t get as much training in as he would have liked but was “feeling good.”

“I’m in LA and California,” he said. “It’s pretty cool to be a part of this and be able to run with my dad.”

The “Stadium to the Sea Course” turns south toward downtown before heading back on a 26.2-mile course through Silver Lake, Hollywood, Beverly Hills, Brentwood and Santa Monica. It will finish just north of Santa Monica Pier at the intersection of Ocean and California avenues.

• Video: Runners take off as the LA Marathon begins

“Take the neighborhoods in,” Los Angeles Mayor Eric Garcetti told participants at the starting line. “Breathe in this amazing city. We have such an incredible face of diversity of this world today and this nation tomorrow.”

The participants included more than 160 “Legacy runners” who had run all previous 31 LA Marathons before.

Also among the field of runners were a couple of men dressed as Elvis, a man holding a “God Bless America” sign, a few people in Native American garb and more than 1,000 participants from Student Run LA.

A few participants urged Garcetti to run for higher office next year.

Raquel Asencio was at the starting line as the runners whizzed by hoping to glimpse sight of her 22-year-old son Ernesto, who lives in the city of San Fernando, but had no luck. It was her son’s first marathon, she said, and she was a bit concerned because he suffers from asthma, though it’s greatly improved since he started running.

“I’m going to be going to different stations (along the route) ... to see if I could see him,” Asencio said.

Ceto noted there was significant moisture in the air Sunday, which could make it “feel harder to breathe” for some runners. Humidity in Santa Monica was at 90 percent at about 9:20 a.m. and was expected to decrease to the mid 50s in the coming hours, he said.