CaptionCloseAbout 7,000 voters cast ballots Monday in Bexar County as the first of seven days of early voting kicked off the May 6 election.With more than 40 polling places open, the locations might have seemed unexpectedly quiet. But, as elections administrator... 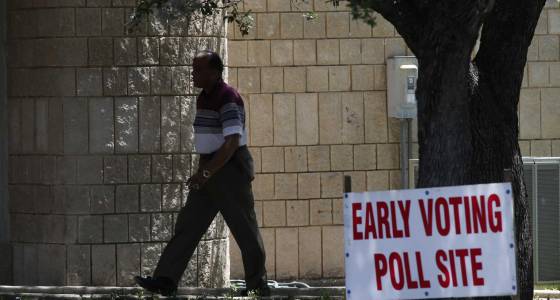 About 7,000 voters cast ballots Monday in Bexar County as the first of seven days of early voting kicked off the May 6 election.

People may recall the scenes at the polls in November for the presidential election, which traditionally sees a much higher turnout, she said.

“I think we’re seeing what we see every odd-year spring election,” Callanen said. “The last election that everyone remembers is the presidential, which had 57 percent turnout. Everyone remembers the lines, but this is a slower-paced election. We don’t have 10 people working each poll, there aren’t any lines. That will grow by the last two days of early voting, we’ll see the bigger push then.”

One reason there could be higher vote totals this year compared with two years ago is there are simply more candidates running this time. For mayor alone, voters have 14 options, and some San Antonio City Council races are packed. There are also numerous bond issues — for the city, school districts and Alamo Colleges.

“Every district has more candidates than we’ve ever seen before. So just on the friends and family plan, we should have more people voting,” she said.

Some voters were confused Monday when Mayor Ivy Taylor didn’t show up on the first computer screen listing mayoral candidates, but instead required voters to scroll to the next page to see the complete list. (Candidates’ names appear on the ballot as determined by a random drawing.)

Chris Quintanilla, a physical therapist who visited a polling place Monday, said she prefers voting early so she doesn’t forget and “it’s just always quicker.” She thought voting might be slow this week because of Fiesta.

Callanen said her office has fielded the usual phone calls from voters with complaints about wrongly placed signs and campaign workers.

“Everyone’s getting their sea legs today, to see where to campaign and put signs. Everyone’s remembering how elections work,” she said.

Those registered can bring one of seven accepted forms of identification to vote, which include a driver’s license, an election identification certificate, a handgun license or a passport. Also, because the state’s law was found to violate a section of the Voting Rights Act, voters can provide other identification such as a voter registration card, an original birth certificate, a current utility bill, original bank statement or paycheck, if the voter couldn’t get one of the preferred methods in time to vote. However, the person also will have to sign a declaration that he or she faced an undue burden in getting one of the accepted forms.

Polls are open this week from 8 a.m. to 6 p.m. but are closed Friday for the Battle of Flowers parade.