It's a cool modern residence with unstoppable skyline views. But it didn't start out that way. A recent remodel brought the mansion perched in Portland Heights into the 21st century while the bones of the home are decades old. In 1980s, the founder of the... 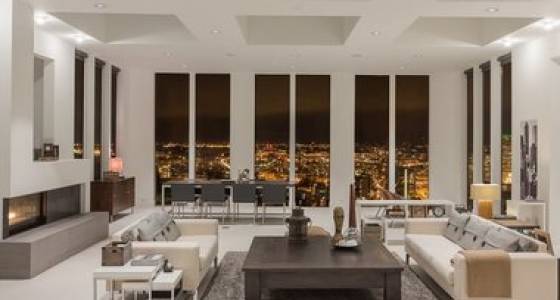 It's a cool modern residence with unstoppable skyline views. But it didn't start out that way. A recent remodel brought the mansion perched in Portland Heights into the 21st century while the bones of the home are decades old.

In 1980s, the founder of the Old Spaghetti Factory restaurants used his know-how of commercial building to construct this almost 7,000-square-foot house on a difficult, downward sloping lot.

Today, the two-level, semi-transparent structure with massive skylights and rooms that flow into one another looks like a contemporary art gallery. It's a big departure from the the old-fashioned style in which the chain restaurant is known. Here, floor-to-ceiling windows frame panoramic views of the city, mountains and Willamette River.

Guss Dussin, and his wife, Sally, opened the first Old Spaghetti Factory restaurant in Portland soon after New Year's Day in 1969. Although menu items are made on-site, from scratch, using fresh ingredients, according to the website, "old" is the word when it comes to the restaurants' name and style. There are vintage Victorian sofas, high-back Queen Anne chairs and salvaged headboards used as booth bench backs.

The antique lighting and brass accents fit the period of the original buildings that now house many of the restaurants. The Dussins were one of the pioneers in repurposing warehouses and historic structures to enhance the dining experience. Many of the restaurants have stained glass; the signature element is an old trolley car that doubles as a dining hall.

The company is still owned by OSF International, which is based in Portland.

The family's home, however, has changed hands over the decades. In 2012, the current owners renovated the tiered house, applying a clean-lined, International aesthetic.

But not for long. An offer has been accepted.

Within days of the hitting the market, there were seven offers, say real estate listing agents Libby Benz and Drew McCulloch of Windermere Stellar.

"There were multiple buyers interested immediately from the time it was posted on the internet" 20 days ago, says Benz. One hopeful buyer was from out of state. The others were Oregonians or recent transplants to Portland, and of varying ages, she says.

"All were seeking an exceptional view home close in the West Hills," she says, adding that sky-high decks make this property a penthouse alternative for a discerning buyer.

Annual taxes are $38,174 for the three-bedroom, four-bath house.