CLEVELAND, Ohio - A pair of Ohio City parking lots is earmarked for a mixed-use project called the Church and State apartments, as part of a broader push to build up major corridors west of downtown Cleveland while preserving houses at the heart of the... 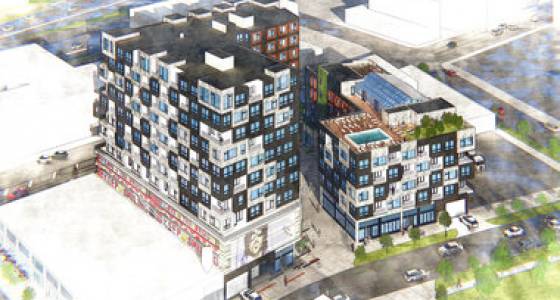 CLEVELAND, Ohio - A pair of Ohio City parking lots is earmarked for a mixed-use project called the Church and State apartments, as part of a broader push to build up major corridors west of downtown Cleveland while preserving houses at the heart of the neighborhood.

Plans for the $50 million project show 161 apartments over 20,000 square feet of retail and 211 indoor parking spaces along Detroit Avenue, on roughly an acre between lower-slung, existing buildings at West 28th and West 29th streets. Named after historic and current Ohio City streets, the buildings will reach five floors - the Church, to the east - and rise to 11 stories - the State, to the west.

A neighborhood block club gave the project a thumbs-up Thursday evening. If a legislative process and other approvals go smoothly, the developers could break ground in December and open the buildings in late spring or early summer of 2019.

"We've looked all over the world from a design and planning standpoint to find the best practices to apply to this project," said Graham Veysey, part of the local development team that started sketching out plans for the site last year.

Veysey and Marika Shioiri-Clark, the couple that rebranded the area around West 29th and Detroit as Hingetown, have teamed up with entrepreneur Brent Zimmerman and Hemingway Development, a company led by Fred Geis, Jim Doyle and Michael Panzica.

After realizing they were eyeing similar development plans for adjacent properties, the investors formed what they describe as an equal partnership and combined their sites to support a larger vision.

Shioiri-Clark and Veysey own the salmon-colored Schaefer Printing building and parking lot at 2817 Detroit Ave., which they bought in June for $500,000. They're turning the small building's upper floors into apartments, including a unit where they plan to live.

Zimmerman owns the western end of the development site, a long-vacant building and unused parking lot he purchased in October for $1.25 million. He's transforming the Steelman Building into a pizzeria and brewery, with a boxing gym in the back.

But the Schaefer and Steelman renovation projects have a sea of blacktop between them, on a street that's experiencing steady interest from apartment developers and other investors. To the west, the Edge32 apartments are rising not far from Mariner's Watch, another new apartment building. A mixed-use residential project is rising at West 25th Street and Detroit, just a short walk from the recently opened West 25th Street Lofts.

The Church and State apartments would range from 580-square-foot studios to nearly 1,900-square-foot townhouse-style units. Based on current rents in the area, tenants might pay between $1,000 and $4,000 a month.

Shioiri-Clark said the team wants to offer two tiers of apartments, some with higher-end finishes and others with more basic features, to accommodate a broader array of renters. Ideally, Veysey said, the living spaces will attract everyone from recent college graduates to families with children to downsizing suburbanites who want to live less than a mile from downtown.

"We have received a lot of questions about market supply and demand," Panzica said, acknowledging the proliferation of rental development in Ohio City and downtown. "But there still is a deficit ... for this type of product."

The buildings will be separated by an angled public space, breaking up the block and linking Detroit and Church avenues. Lined with retail, the walkway could include a splash fountain and steps that might serve as seating for performances, concerts and other events.

"There are a lot of things that we like about this, including the fact that they'll be adding a pedestrian cut-through on what is a very large block," said Tom McNair, executive director of the Ohio City, Inc., neighborhood group.

Potential retail tenants might include a pharmacy, a dry cleaner, a small outpatient medical clinic, a tailor, a laundromat, a hardware store or a tool lending library, where project residents and neighbors could borrow equipment. "We're really not interested in filling every single space with a different bar," Shioiri-Clark said.

Parking - a hot-button topic in the neighborhood - will be tucked in the basement and on the second and third floors of the 11-story building. Renderings show that mesh screens printed with custom artwork will conceal the above-ground parking, bringing more personality to the project and nodding to the murals and galleries that have popped up nearby.

The developers added more garage parking in response to neighbors' concerns. They're also talking to the city about creating roughly 40 parallel parking spaces from unused stretches of pavement on surrounding streets.

The new buildings, located on a well-traveled bus route, will include 177 bike-storage spaces. And the developers are talking to a handful of car-sharing companies about forming a partnership to house a fleet of electric vehicles on site, Zimmerman said.

"One of the big objections to these projects is parking," he said. "Not only are we providing enough, but we're trying to eliminate the need for it."

Most of the project funding would come from private sources, though the team plans to seek residential property-tax abatement from the city. The city routinely grants such tax breaks for new and renovated housing that meets certain green-building standards. A mortgage might come through a federally-insured loan program offered by the U.S. Department of Housing and Urban Development.

The developers expect to go through a legislative process to apply a "planned unit development" zoning overlay to the site. The resulting legislation will govern everything from the project design to specific building materials.

"It's appropriate to have dense residential development along this corridor to support transit use, to support walkability, to support more and more folks coming into the neighborhood," said Councilman Kerry McCormack, who represents the area. "In a city that's lost half of its population, it's important that we add folks to the city for the health and well-being of the city."