Appointed Ald. Sophia King claimed victory Tuesday night against four challengers in Chicago's 4th Ward special election and avoided a runoff contest.With all precincts reporting, King had about 64 percent of the unofficial vote. In a distant second was... 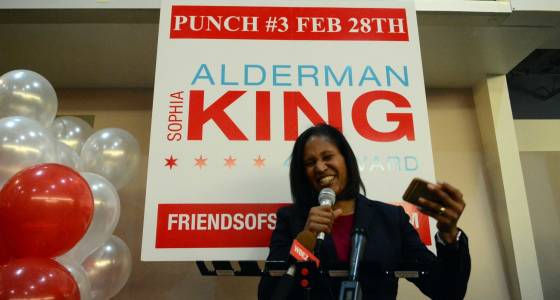 With all precincts reporting, King had about 64 percent of the unofficial vote. In a distant second was attorney Ebony Lucas, who was backed by about 18 percent of voters. Three other candidates hovered around 6 percent.

King boasted high-level endorsements, including former President Barack Obama, who she calls a friend and neighbor, Cook County Board President Toni Preckwinkle, the ward's former alderman, and the Rev. Jesse Jackson, whose Operation Rainbow/PUSH headquarters are in the ward. King acknowledged that support in her victory speech.

"I have take a small moment to thank President Obama. History will tell, but I think he'll go down as one of the best presidents ever," King told about 100 supporters gathered at Little Black Pearl in North Kenwood. "I'm just happy to have known him that way."

King also talked up the 4th Ward as "a treasure."

"We have a long, beautiful political tradition, mostly an independent tradition I hope to pick up and revive," she said. "But friends, our city and neighborhoods are facing a lot of challenges. We can't stop working until every corner of this ward and this city can be traveled safely by our children. We have to take a hard look at ourselves and really ask how we got here."

The candidates were vying to serve out the remaining two years of the term of former Ald. Will Burns, who resigned last year to take a job with Airbnb. In April, Mayor Rahm Emanuel appointed King to the seat until Tuesday's special election.

Ald. David Moore (17th) congratulates Ald. Sophia King as she celebrates her victory in a special election for the 4th ward aldermanic seat at Little Black Pearl on Feb. 28, 2017.

Ald. David Moore (17th) congratulates Ald. Sophia King as she celebrates her victory in a special election for the 4th ward aldermanic seat at Little Black Pearl on Feb. 28, 2017.

(Brian Jackson / for the Chicago Tribune)

King not only had the advantage of incumbency, but also many high-level endorsements and an ample campaign fund. King collected campaign contributions approaching $250,000 — nearly three times as much as her opponents combined, which allowed her to blanket the ward with signs and bombard homes with mailers.

Even those advantages didn't guarantee an election night victory, however, given that an off-year special election in a single ward was expected to draw a small turnout — which came in at about 18 percent. In such a contest, a candidate with the ability to get voters to the polls can score an upset.

King's opponents in the 4th Ward, which stretches along the lakefront from the south tip of the Loop to south edge of Hyde Park, tried to portray her as too beholden to the city powers that be, particularly Emanuel.

The mayoral appointee sought to counter that portrayal by noting her history as an educator and detailing her long community involvement. She is the former president of the Kenwood Park Advisory Council, helped create Ariel Community Academy and is president of Harriet's Daughters, a not-for-profit group she founded in 2010 "to secure opportunities for employment and creation of wealth among African American communities."

King, a member of the City Council Progressive Reform Caucus that's often at odds with Emanuel, also pointed to situations in which she has voted with mayoral opponents during her 10-month stint on the City Council. Last week, she voted against the mayor's plan for spending unclaimed property-tax rebate money, contending more of the money should have been gone to directly to neighborhood crime-prevention efforts.