CLEVELAND, Ohio -- Eleven players from the Mid-American Conference have been invited to the 2017 NFL Combine later this week in Indianapolis. The 11 players include a pair of Northeast Ohio products from the Toledo Rockets, tailback Kareem Hunt (Willoughby... 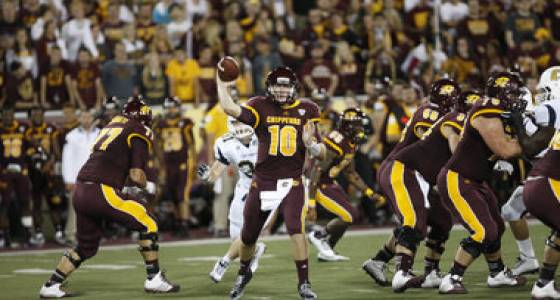 CLEVELAND, Ohio -- Eleven players from the Mid-American Conference have been invited to the 2017 NFL Combine later this week in Indianapolis. The 11 players include a pair of Northeast Ohio products from the Toledo Rockets, tailback Kareem Hunt (Willoughby South High) and tight end Michael Roberts (Benedictine).

Hunt, in particular, will draw increased attention at the cattle call for sprints, shuttles and interviews coming off his impressive Senior Bowl performance in January. The 6-0, 220-pound tailback rushed 15 times for 118 yards and had one reception for another 11 yards. He was named the North MVP for the game.

The highest profile player on the list is Western Michigan wide receiver Corey Davis, who is expected to be a mid-first round pick. He was the focal point of WMU's run to an undefeated 13-0 season and Cotton Bowl appearance, which proved to be a big payday for the MAC.

While the MAC is known for delivering its share of quarterbacks to the NFL, only Central Michigan's Cooper Rush is headed to the Combine. Offensive and defensive linemen have drawn the attention of NFL scouts.

There are a few players not on this list who could also generate some buzz before the 2017 NFL Draft, should they show well in their respective pro days around the league. Western Michigan quarterback Zach Terrell, Kent State cornerback Najee Murray and Akron punt/kickoff return specialist JoJo Natson are the top names.

Also, still to be determined is if the NFL will look at Kent State safety Nate Holley, who had been one of the leading tacklers in the nation and high on some NFL boards before a late-season altercation landed him in jail.

He is currently working his way through the court system. If Holley's legal issues clear up before the draft, he could potentially be a late-round pickup.

Here's a list of the MAC players invited to the Combine. Click on each player to get a review and scouting report from NFL.com: