Here are the latest headlines and updates on tampabay.com.53 Minutes Ago6 Days Ago8 Months AgoA ride on the Cross-Bay Ferry could help folks in Tampa who might be looking for a move to St. Petersburg — or vice versa. Susan Taylor Martin explains how a group... 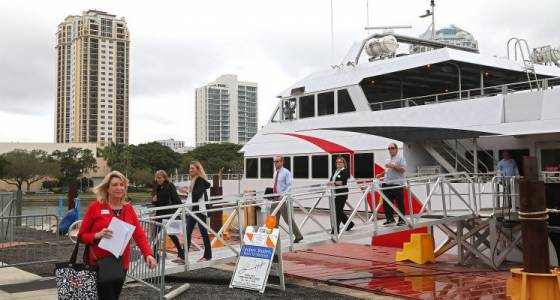 Here are the latest headlines and updates on tampabay.com.

A ride on the Cross-Bay Ferry could help folks in Tampa who might be looking for a move to St. Petersburg — or vice versa. Susan Taylor Martin explains how a group of Tampa Realtors reacted when they saw what St. Petersburg had to offer — and which condos they liked the best.

The White House says President Donald Trump's upcoming budget will propose a whopping $54 billion increase in defense spending and impose corresponding cuts to domestic programs and foreign aid. The result is that Trump's initial budget wouldn't dent budget deficits projected to run about $500 billion. White House budget officials outlined the information during a telephone call with reporters given on condition of anonymity.

Curtis Reeves, the man accused in the fatal 2014 shooting in a Wesley Chapel movie theater, is in court for a hearing to determine if he should be immune from prosecution under Florida's "stand your ground" law. Reeves, 74, a retired Tampa police officer, has argued that he was defending himself when he fired the single shot that killed 43-year-old Chad Oulson. The confrontation began after Reeves asked Oulson to turn off his phone during previews before the movie Lone Survivor. Stay with tampabay.com for live updates from the courtroom.

An influential doctors group is beefing up warnings about marijuana's potential harms for teens amid increasingly lax laws and attitudes on pot use. Many parents use the drug and think it's OK for their kids, but "we would rather not mess around with the developing brain," said Dr. Seth Ammerman. The advice comes in a new report from the American Academy of Pediatrics, published Monday in Pediatrics.

A police officer shot and killed one pit bull and seriously injured another after the dogs attacked and killed a poodle as it was being walked by its owner then turned on the officer, Tampa police said. Police said they responded to the attack about 5:55 a.m. Monday at the North 37th Street home of Keithroy George.

Presenter Warren Beatty shows the envelope with the actual winner for best picture as host Jimmy Kimmel, left, looks on at the Oscars on Sunday, Feb. 26, 2017, at the Dolby Theatre in Los Angeles. The winner was originally announced as "La La Land," but was later corrected to "Moonlight."

In what is most certainly the most shocking moment in Oscars history, Faye Dunaway announced the wrong winner for best picture at the end of the night, awarding the trophy to La La Land when it actually was supposed to go to Moonlight. Here's how it all went down.

Students and staff of a Lakeland middle school were greeted by grief counselors and a growing memorial on their campus after a teacher and assistant principal there were found fatally shot in Brandon on Friday. Lisa Fuillerat, a sixth-grade math teacher at Lake Gibson Middle School, and Samara Routenberg, an assistant principal there, died Friday morning in a shootout with Fuillerat's estranged husband, according to the Hillsborough Sheriff's Office. Deputies say Vicente Fuillerat, 53, broke into the home on Hickory Creek Drive where the women were living as a couple.

House Speaker Richard Corcoran and other legislators are in Washington today and tomorrow for a series of meetings and social gatherings with Sen. Marco Rubio and others. Though the parties are keeping details close — for reasons that aren't clear — the Buzz has obtained an itinerary.

Snook about to be released.

In the shallow waters of Tampa Bay, there are generally three desirable sport fish for anglers: trout, redfish and snook. Perhaps the most challenging, and fun, fish to catch is snook, Rodney Page writes. While snook are in local waters year round, they tend to become more active in the spring and summer. The harvest season for snook begins Wednesday. Here are a few things you need to know.

The USF men's basketball team officially sealed its fate as one of the largest jokes in college sports, never mind the 7-20 record, when it left players Troy Holston and Geno Thorpe asleep in the Houston airport terminal while making a connection back to Tampa from Tulsa. So much for the buddy system, Martin Fennelly writes. This program needs a clown car.

The Thai Chicken Biryani is chicken marinated in cumin, garlic, yogurt and coriander, baked and served over jasmine rice.

Centro Ybor has been rough stuff when looking for something good to eat over the years, food critic Laura Reiley writes. Samurai Blue has always held down the fort, as has Tampa Bay Brewing Co., and certainly Hamburger Mary's gets some points on the board for providing a rollicking good time. She says this new Thai offering is worth checking out.

Nice guy that he is, Jim Gaffigan has just made your New Year's Eve plans for you. The family-friendly comic and actor is bringing his Noble Ape Tour to Amalie Arena in Tampa on Dec. 31, ensuring you'll be able to usher in 2018 with a laugh. Tickets are $32 and up, and go on sale Friday.