CLEARWATER –– In what officials called a historic meeting, Pinellas County's 12 elected leaders met Tuesday for the first time as a new government body, the County Attorney Oversight Board. Their first order of business: figure out how to conduct a nationwide... 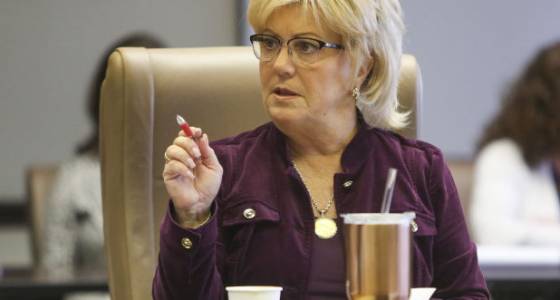 CLEARWATER –– In what officials called a historic meeting, Pinellas County's 12 elected leaders met Tuesday for the first time as a new government body, the County Attorney Oversight Board. Their first order of business: figure out how to conduct a nationwide search for the next county attorney.

The county's seven commissioners and five constitutional officers — the sheriff, clerk of the court, property appraiser, supervisor of elections and tax collector — comprise the new oversight board. It was created when voters passed a charter amendment in November giving the panel the power to hire, fire and evaluate the county attorney.

They need to choose a successor to Pinellas County Attorney Jim Bennett, who is set to retire July 30. But it didn't take long Tuesday for differences to emerge now that 12 elected officials play an equal role in the decision to evaluate, hire and fire the county attorney. The last search in 2008 was handled solely by the Pinellas County Commission.

Sheriff Bob Gualtieri said the county will not find the best candidate if the search is limited to Florida and the job is only advertised in local publications like the Tampa Bay Times.

He also urged his fellow officials not to follow the blueprint the county commission used to hire the county administrator in 2014, especially in regards to advertising the position and ranking candidates by categories. He also led the push eliminate categories for external and internal candidates.

"It's such an important decision," Gualtieri said during the 2-hour meeting. "This is a new process. We hope this is somebody who we will be hiring for a long time."

Added Pinellas Supervisor of Elections Deborah Clark: "I agree that fresh eyes are a good approach."

Differences emerged on how the 12 officeholders should conduct the annual review of the county attorney's performance if disputes arise between two elected leaders, or the attorney and an officeholder.

Clerk of the Circuit Court and Comptroller Ken Burke said his office has often dealt with those kinds of divisions. County Commissioner Karen Seel said a dual-representation agreement reached in 2008 allows the county officials to hire an outside attorney if there is a conflict with the county attorney.

Wade Vose, an attorney hired to guide last year's Charter Review Commission and to provide guidance for the oversight committee, said Pinellas County's new structure is "unique" when compared to 19 other counties governed by charters.

"It's difficult for the county attorney to have several masters," Vose said. "It's a unique situation. In other counties, some (constitutional officers) have their own general counsels."

County Commissioner Ken Welch agreed, saying: "It's worth looking at that model."

The group will continue to discuss that process in future meetings. Another looming issue that was tabled until March 13 is Bennett's current contract and compensation.

Bennett has spent 33 years giving legal advice to the county. But in 2008, when he was promoted from acting county attorney to the full-time job, the county commission approved some perks that no other county employee receives.

Though Bennett belongs to the state pension system, the county has also deposited an additional $201,000 into his personal tax-deferred retirement account. He can access the money when he retires on July 30. His contract also calls for a $750-a-month vehicle allowance. That's an extra $9,000 a year for a total of $66,000 Bennett has received since 2008.

Those rare perks didn't become an issue until Bennett announced his coming retirement on Jan. 30. Four of the county commissioners elected since 2012 had said they didn't know those perks were in his contract. But Seel, the commissioner, told the four newest members they needed to check their orientation packets from when they took office.

The committee asked Pinellas County Human Resources Director Holly Schoenherr to prepare salary and benefit reviews from other counties that can be used in the hiring process.

During a public commenting period, resident and attorney James Holton urged the committee to "take a critical look" at how the county attorney can effectively represent 12 officeholders. Holton said he was also surprised to learn about Bennett's perks.

"That does not go to transparency in government," he said.