NEW ORLEANS — A pickup truck plowed into a crowd of spectators at a Mardi Gras parade in New Orleans on Saturday evening, injuring 28 people in an episode that the police said was linked to drunken driving.7 Months Ago6 Months Ago4 Months AgoNew Orleans... 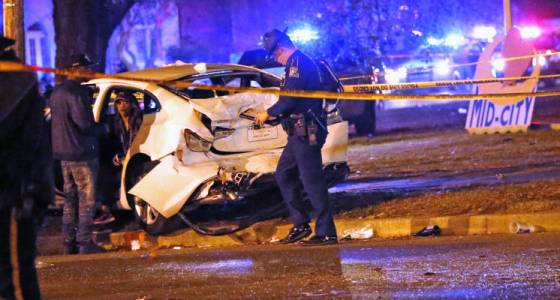 NEW ORLEANS — A pickup truck plowed into a crowd of spectators at a Mardi Gras parade in New Orleans on Saturday evening, injuring 28 people in an episode that the police said was linked to drunken driving.

New Orleans Police Chief Michael Harrison said the suspect is being investigated for driving while intoxicated.

The driver was taken into custody, said Beau Tidwell, a police spokesman. "This was a tragedy that came from someone making bad decisions with alcohol and vehicles."

The spectators' injuries were not life-threatening, Mayor Mitch Landrieu wrote on Twitter. A police officer and a 3-year-old child were among those hurt, the police said, and seven of the injured declined to be taken to a hospital. Five of those hospitalized were in guarded condition, the Associated Press reported.

The episode occurred around 7 p.m. on one of the busiest nights of Mardi Gras, when thousands of people throng the streets of Mid-City to watch the elaborate floats and clamor to catch beads and trinkets tossed from riders.

As police and city officials were assessing the scene, people were streaming home as plastic bags that used to hold trinkets and discarded beads littered the ground. The area where the incident occurred was cordoned off with police barricades.

Spectators realized something was amiss when they heard the truck's tires "peeling out," Trey Klechak, 20, a student at Louisiana State University, said.

Klechak said the pickup struck several people before it hit the back of a white sedan, crashed into a grassy median and then struck more attendees.

He said he was at the intersection where the crash happened. It appeared the driver was trying to weave around people, Klechak said, and then hit the accelerator.

Klechak added that he went to help after the truck stopped and did not see anyone pinned underneath.

Another witness, Patrick Greenfield, 31, of New Orleans, said the vehicle appeared to speed up as it approached the intersection.

"I've never seen anything like this at a parade," he said.

One woman at the scene told the New Orleans Advocate that the truck whisked by her just feet away as she was walking through the intersection. Carrie Kinsella said, "I felt a rush it was so fast."

Kourtney McKinnis, 21, told the Advocate that the driver of the truck seemed almost unaware of what he had just done.

Information from the Associated Press was used in this report.