CaptionCloseNEW ORLEANS (AP) — The trumpets and horns from the marching bands blared. The crowd screamed for beads. People paraded in costumes ranging from the politically-charged to the whimsical. And despite all the noise, a 2-year-old napped.Fat... 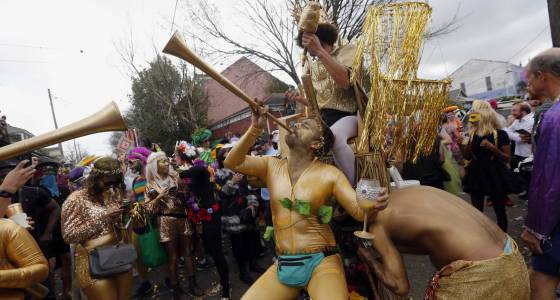 NEW ORLEANS (AP) — The trumpets and horns from the marching bands blared. The crowd screamed for beads. People paraded in costumes ranging from the politically-charged to the whimsical. And despite all the noise, a 2-year-old napped.

Fat Tuesday, which marks the end of the Carnival season, started before dawn in New Orleans and wraps up with a ceremonial clearing of Bourbon Street at midnight before the fasting season of Lent begins Wednesday.

The festivities were marred in the Alabama beach town of Gulf Shores where police said a car participating in the city's Fat Tuesday parade accidentally plowed into a band, injuring 12 people.

But in New Orleans and elsewhere, the day was marked by frivolity and fun with locals and tourists watching parades and dressing up in funky costumes.

The Clements family has been staking out the same bit of St. Charles Avenue sidewalk for more than 50 years to watch the krewes of Rex and Zulu parade. The extended family had a dozen children with them — including 2-year-old Cecile Gros, who lasted until about noon before falling asleep. Her mother, Alison Gros, recalled coming one year when she was nine months pregnant.

"If I'd delivered on Mardi Gras, I wanted to name her Marty — Marty Gros. But my husband didn't really go for it. And she was born two weeks later," she said.

Other children had also partied till they napped in parents' arms or strollers. Mardi Gras may be a bawdy party in the French Quarter, but outside that area, it's often a family affair with parents dressing up their children in costumes or putting them on ladders to catch beads and trinkets.

Carnival season kicked off Jan. 6, and Fat Tuesday is generally a holiday for people in the New Orleans area. One reveler, Craig Channell who was visiting from Tampa, Florida, described it as "the one time of year people can act like fools and get away with it."

The biggest parades take place along the St. Charles Avenue parade route, where the Krewe of Zulu kicked things off, followed by the Krewe of Rex.

Pete Fountain's Half-Fast Walking Club strutted from the famed Commander's Palace restaurant to the French Quarter, tossing beads and doubloons to recordings of his music. Fountain, a clarinetist, died in August of last year, but the club members — decked out from hat to shoes in nearly fluorescent lime green — were carrying on the tradition. They dubbed it "Walking in the Limelight with Pete."

Last year's Mardi Gras took place on a chill February morning, but the weather this year was balmy. Keyshaun Morgan, wearing shorts and a halter top, said she couldn't remember the last time she'd been able to wear shorts on Fat Tuesday.

"It's lovely. Thank you, Jesus, for this weather!" she exclaimed.

In another part of the city, costumed people took part in the St. Anne's parade — an eclectic walking parade that starts in the Bywater and Marigny neighborhoods and ends in the French Quarter.

Linnea Eitmann and husband Adam were dressed in hand-made purple and cream colored costumes inspired by French royalty and the Brazilian samba — an homage to the French and Brazilian Mardi Gras traditions.

Linnea said the couple takes part in many activities leading up to Fat Tuesday but this is the day to really "show people what you are made of" when it comes to costumes.

"Everybody works so hard on their costumes," she said. "You can wear whatever you want."

The country's heated politics have been a running theme through floats and costumes this Mardi Gras season; Tuesday was no different.

Jim Segreto wore a costume inspired by President Donald Trump's promises to build a wall between the U.S. and Mexico.

"I had to have something that made a statement," Segreto said.

Many towns and cities across the Gulf Coast also celebrate Mardi Gras.

This year's Mardi Gras season was marred by accidents. In Gulf Shores, Alabama, spokesman Grant Brown said a band had just entered a Fat Tuesday parade when a car behind the group lurched forward. Three young people were in critical condition and nine others had less-severe injuries.

Video and photos from the scene show emergency workers helping injured members of the Gulf Shores High School band. The parade was canceled. Police said there is no indication that the driver, a 73-year-old man, was under the influence of alcohol or drugs.

In Mississippi, a man watching Biloxi's Mardi Gras parade died after falling from the back of a pickup truck onto a piece of exposed rebar.

A suspected drunken-driving incident sent more than 20 people watching a parade in New Orleans to the hospital Saturday night. No one was killed.